By now, you have probably seen or at least heard of the introduction of the new body types Barbie is offering in its Fashionista line of dolls. They are offering a Curvy body, a Petite body and a Tall body. Probably the most talked about is the "Curvy" body. Many believe that this is a direct response by Mattel in answer to the Lammily doll. If it is, then thank you Lammily! Now, I do own more that one Lammily doll, but I do not like their ad campaign bashing Barbie. I think there is a place in this world for dolls of all sizes and shapes. Bravo Mattel!

Now if you know me at all, I did have to order some in each of the new body styles. Mine arrived Friday and they did not disappoint (except for the fact that they don't have articulation :-( ].  I took some pictures and did some comparisons to other dolls. I will share these with you all and, of course, voice my opinion.

We will start with a photo of all of the new dolls I received.

I really love the Curvy dolls! Maybe because I am a bit curvy myself! So I compared the Curvy girls to Lammily.


Next, I tried on some other Lammily clothes on Barbie. All of the skirts from Lammily were too big for Curvy Barbie. However, there are some pieces that work.

Next up, is the Petite doll comparisons. I compared Petite Blue Brocade to a hybrid articulated Skipper doll, a Skipper doll with a Simba Supermodel body and a Momoko doll. 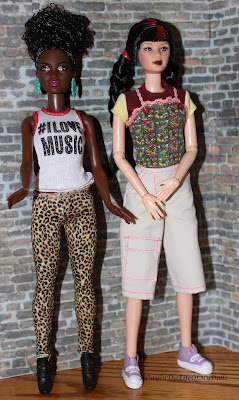 Finally, because I often have used a Liv body as a rebody choice for Skipper, I decided to compare these 2 as well. This is Generation Girl Mari on a Liv body. Still some possibilities here!

Now for the new Tall Barbies!


The big question is - can they swap clothes? 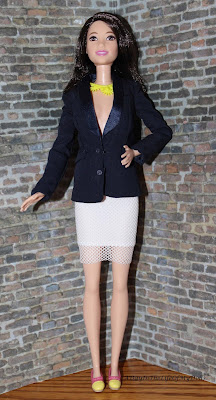 Tall Barbie cannot wear Giselle's pants, but she can wear her jacket (Giselle better keep an eye on her stuff!).  Giselle, on the other hand can wear both pieces and look pretty good in them!

In conclusion, I am loving the direction that Barbie is taking with this new group of dolls. However, I so wish these ladies had articulation! I do think my favorite body of these is the new Curvy body because she is such a departure from what we have seen in the past. Will I body swap any of them? Probably. I see some viable alternatives for both the Petite and the Tall bodies. Of course, this will depend on skin tone matches. I hope that Mattel is just waiting to see how they sell before making a more substantial investment in the bodies. I for one, will do my part and purchase more! I already have my eye on some of them!