Made to Move Barbie Review

Yes, I purchased the Made to Move Barbie dolls from Amazon.com. I decided that I like them so much, that I would do a review on them. I did purchase multiples of each of them so I would have them for body swapping. Some of my Flickr friends have blamed me for them not being able to get a doll, but I say, you snooze, you lose! Oh well, they will have more available soon!


There are 3 versions of the Made to Move Barbies. Theresa has a tan skintone, Barbie has a medium caucasian skintone and Lea has a pale Asian skintone. According to the photos on the box, there will also be an AA skintone with the Asha facemold. Speculation is that she will have the Grace skintone.

Overall, these dolls for me are a win-win. Their articulation is spectacular and I say to Mattel it is about time. The current dolls are an early release and have only been available on Amazon and eBay. From the Amazon Barbie Store, they were $14.99 each, and have sold out. There are still private sellers on Amazon and on eBay that have them, but they are asking between $30 to $75 for them. Because the official release of these dolls is supposed to be in January, I would recommend waiting, however, do keep your eyes open as there have been reports of them being available in some TRU stores at $14.99 and Amazon may get more in stock. If Mattel is smart, they will make them available in time for Christmas.

As you can see from the above photo, they have very flexible joints. They are double jointed at both the elbows and the knees and have jointed ankles, thighs, upper arms and torso. I will show some picture later of them naked so you can see all of the points of articulation. The good news is that the joints are all nice and tight, the doll is sturdy and well constructed.  The only negative I see so far is that the hair in the Lea and Barbie versions is extremely glue laden. I had a couple of them where the glue had dripped down the neck! When you take the head off of the prong, the prong is sticky with glue and there are chucks of glue that come out with it. So far, all of the Theresa molds that I opened did not have any glue at all in the head. I do hope that they remedy this problem for Lea and Barbie in the production release.

I have done some comparisons to other jointed dolls that I have, which include a Barbie Style body, a Liv body and a PlayToy Action Figure body. I have tried to put each of them in a comparable pose, but as you will see, they could not all do every pose.

Next they tried putting their hands on their faces. This would be helpful for holding a phone to talk on it, for putting on make up or doing your hair!  Made to Move can put her hands on her face, actually in many positions. Play Toy can also touch her face, but not at as low of a point on her face as Made to Move. Barbie Style, she says: "Ummm, this is giving me a headache!" as does Liv. Once again, Made to Move takes this point! 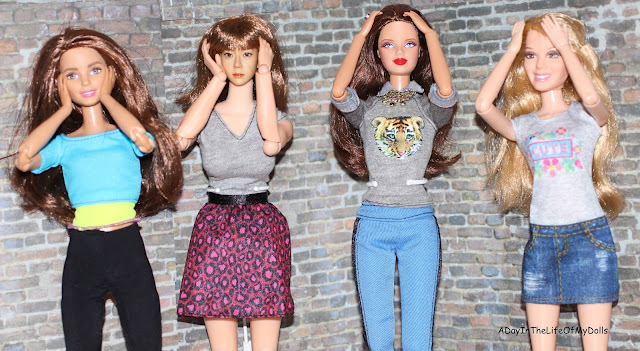 Excitedly, Made to Move shouts: "How about we get on the floor and do some yoga poses?!" Liv and Playtoy look at her and say, "What?! Are you nuts?!" and Barbie Style looks at her as says: "This will have to do!"  Made to Move is grinning inside and whispers: "Yes! I win again!" 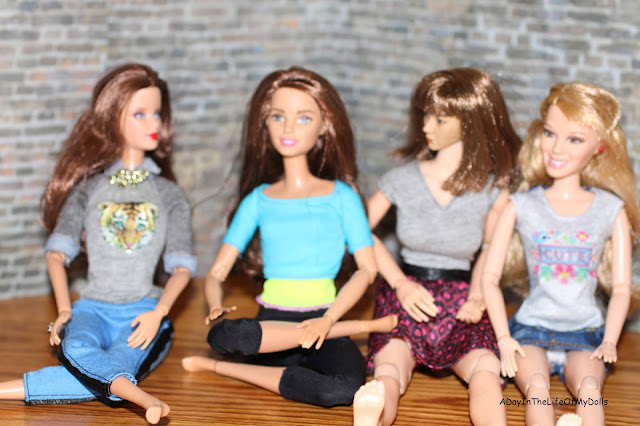 The next move is to sit on their legs on the floor. Barbie Style: "I stoop to noone!" and she just kneels. Made to move and Play Toy are pretty equal in this pose. Liv is pretty close, but cannot quite sit all of the way down. This one is a tie between Made to Move and Play Toy. 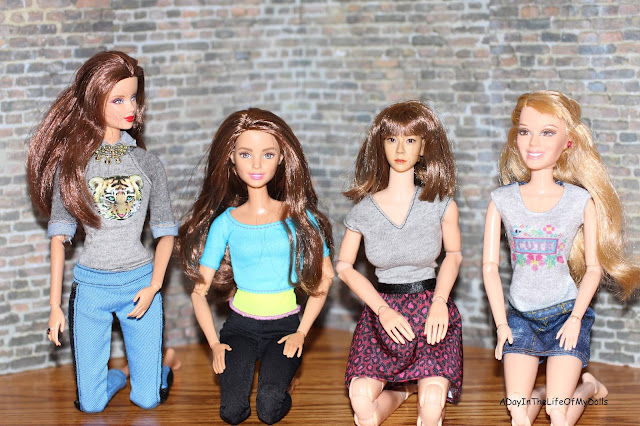 Ok, if you are still with us, they are now posing nude so a comparison can be made based on the aesthetics of each doll's body.

First up, we have Barbie Style. Her body appearance is very nice and smooth. Her joints are subtle and do not detract from her pleasant appearance. The Made to Move joints are much more obvious, but to me, I do not thing they detract from her appearance. Some find that the upper arm joint makes her look too muscular, but I actually find this look attractive as you can tell she takes care of her body and works out! The inside of her elbow joints are a little obvious, but not overly so. The joint I find the least attractive on her is the upper thigh joint, but the trade off of her ability to pose in so many positions make it worth it! Play Toy has a very attractive body. As with many Action Figures, her joints are more obvious, but the fact that you can exchange her hands and feet give her more expressive posing options. She can hold a drink, shoot a gun or even point at you! For me, the Liv body is probably the least aesthetically pleasing, however, it is a less mature body and is good to use for younger characters. I do like its versatility as a body exchange option. 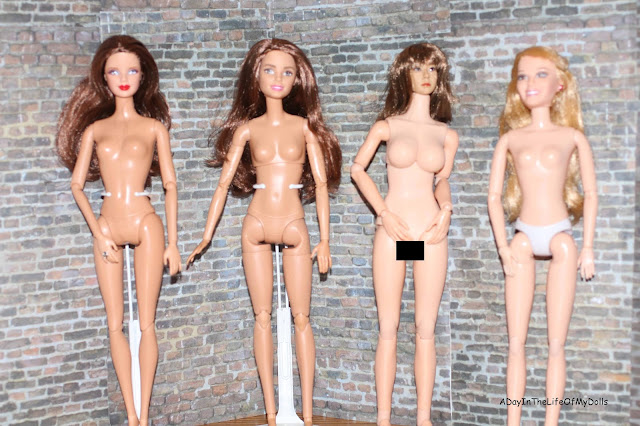 Rear view! They are all fairly equal when looking at them from behind! The least noticeable knee joint is probably Barbie Style, then Liv, Made to Move takes third and Play Toy takes last place in this category. Only because the joints are more noticeable. However. I also find that Play Toy's elbow and wrist joints are somewhat less attractive than the others, but her butt is probably the most realistic and aesthetically pleasing butt! All in all, I will take the looks of these joints over not having any at all! 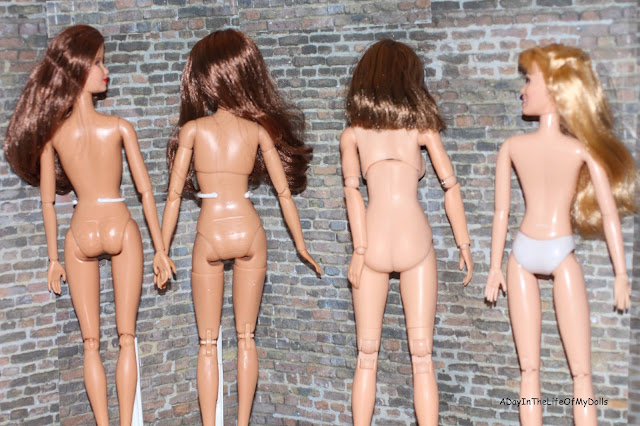 With that, Barbie Style, Play Toy and Liv bid us farewell and my very favorite poseable body gal stops in for a cameo appearance. The Phicen Stainless Steel skeleton body, to me, is by far the best poseable body around. However, at a pricetag of between $80 to $120, she is also the most expensive. Here she goes head to head with Made to Move on the merits of poseability:

Made to Move gets her street clothes back on and waits for her boyfriend to come and pick her up. I think she looks great in this outfit. She looks like a girl who takes care of herself and keeps her body toned. Her arms are shapely with a hint of muscularity. She is looking good!

Her boyfriend Liam also appreciates her efforts to stay healthy and look good. He, for one, is very happy she has joined him in Hanaly Corners!

Liam with his Made to Move sweetheart. He says, "Give her a name already!"

I do hope you enjoyed my review and photos. Thanks for stopping by. I enjoy receiving your comments!
Posted by Phyllis at 11:41 PM