Today was Chinese New Year. My family celebrates this holiday as a way to honor the culture of my 2 daughters heritage. For those of you who do not know, I adopted my daughters from China in 1996 and in 2001. Today, we prepared Chinese stir fry for dinner. I also got out some of my special Chinese dolls and photographed them for the occasion.

I traveled to China in 1997 to adopt my oldest daughter (Alyssa LiLan). She was from the Jiangxi Province. The Provincial Government gave all families adopting a commemorative plate. The single moms (I adopted as a single) were given a plate with a lady on it and the 2 parent families were given a plate with a view of a Bridge. The plate I received is in the center of the picture below. I purchased the Cloissoine teas sets in 2001 when I adopted my second daughter (Hannah KunRong). 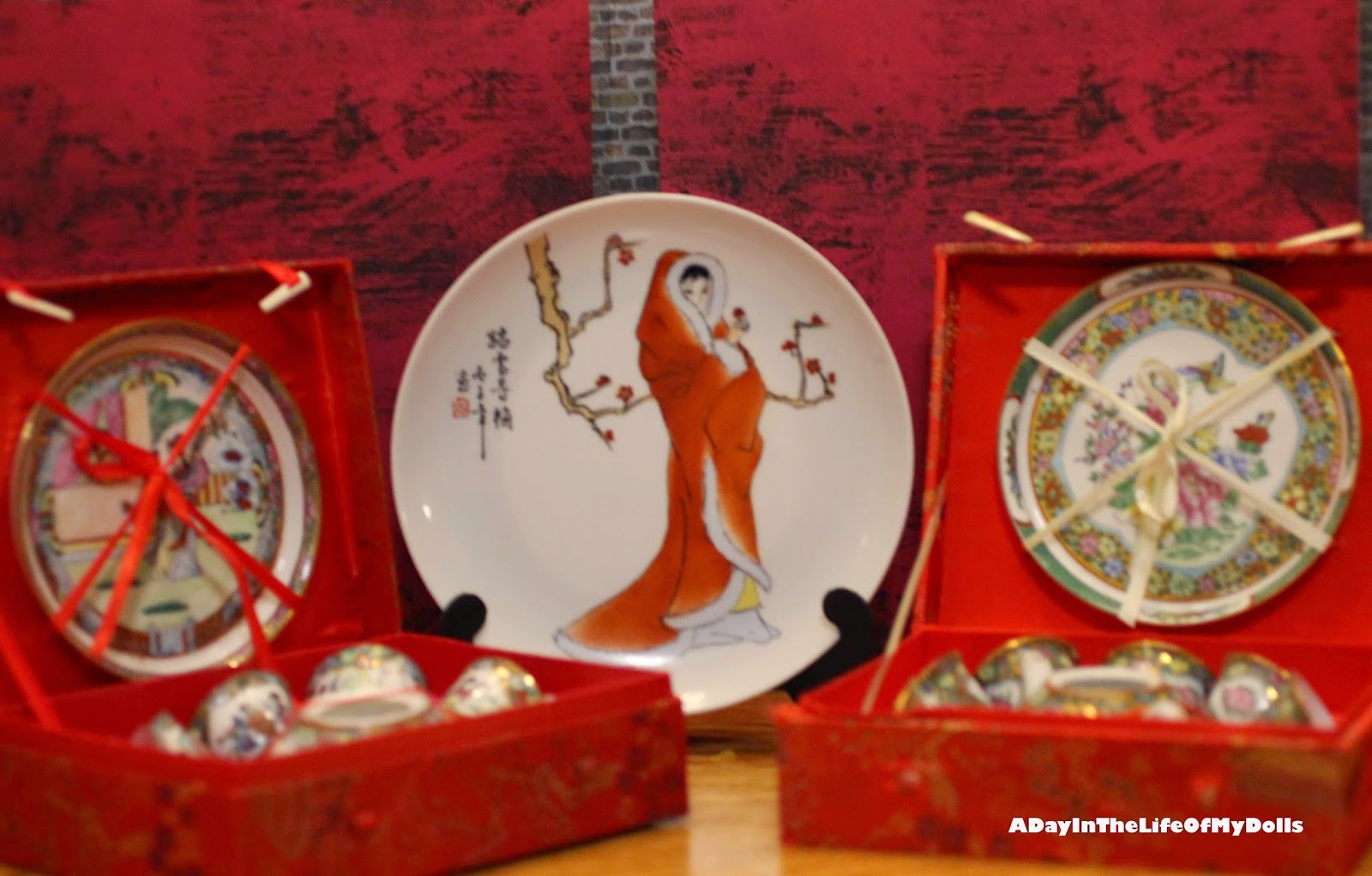 Also while in China I purchased some Chinese gift dolls for them. 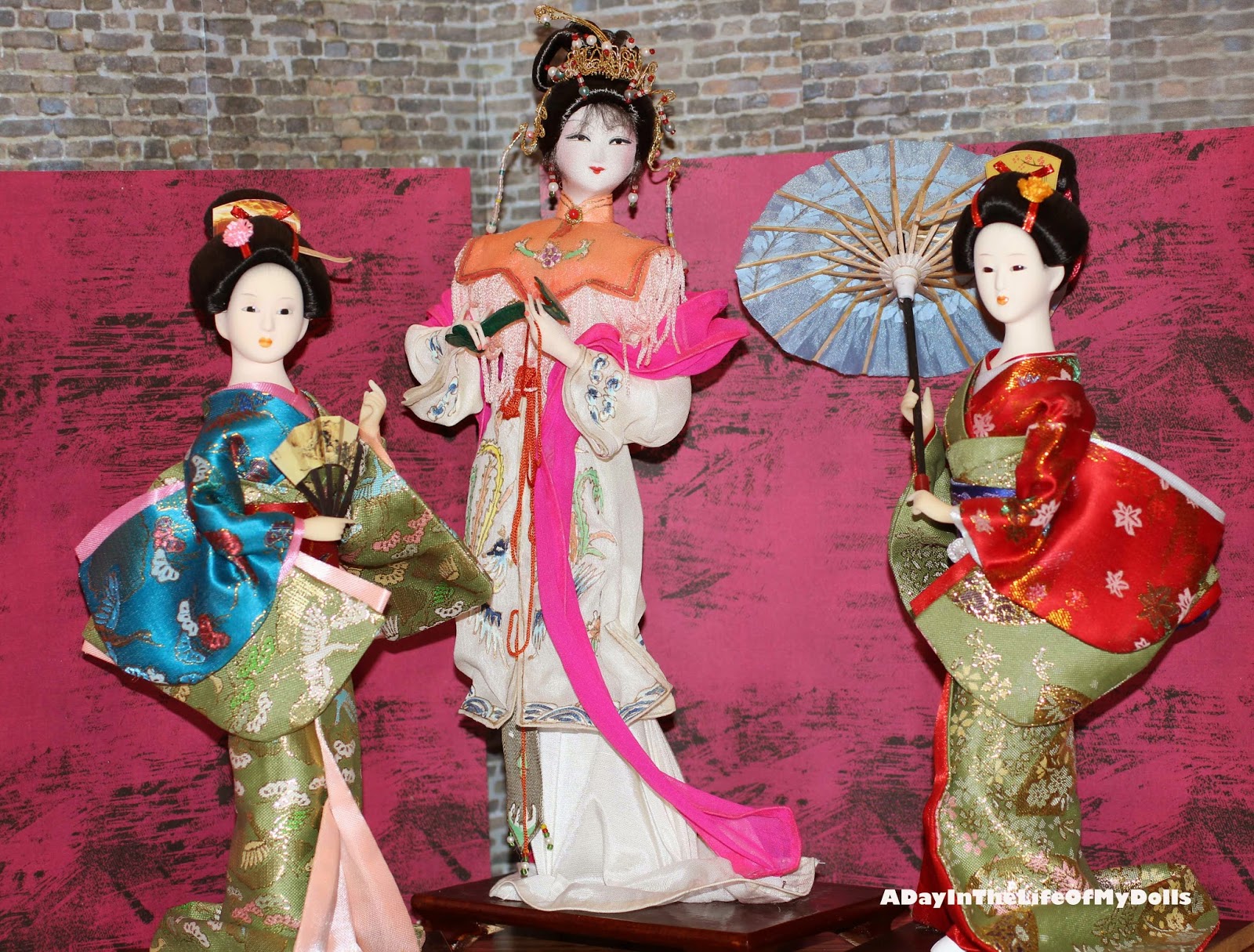 The doll in the middle is a Chinese actress doll that I purchase in 1997 when I adopted my oldest daughter. The Chinese officials all thought that she was so beautiful that she would be an actress! The other 2 dolls I bought in 2001 when I went to China to get my youngest daughter. I bought 1 doll for each daughter to have. 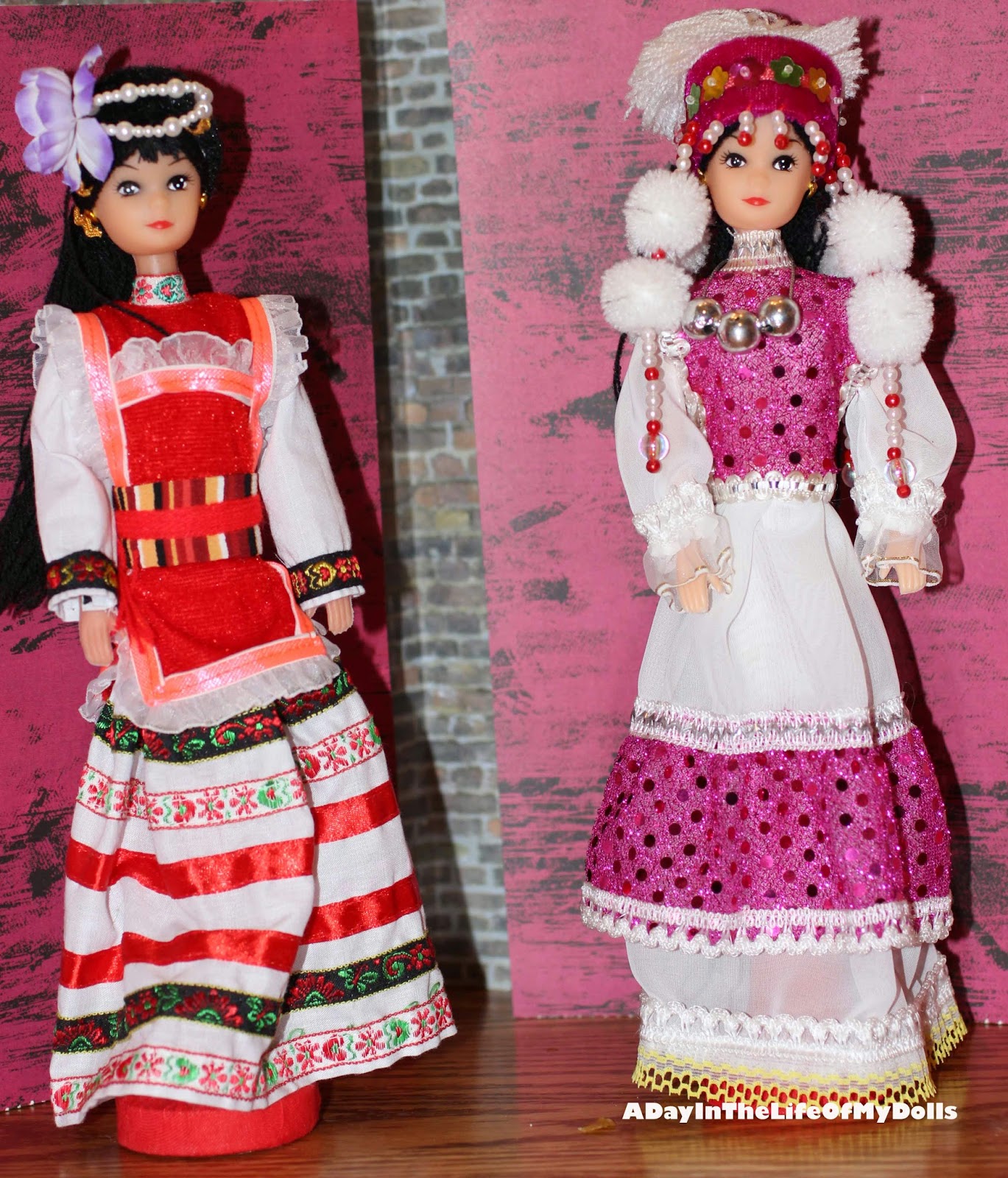 When I went to China in 2001 to adopt my youngest daughter, she was from the Yunnan Province. There are 56 minority groups in China, 26 of which reside in Yunnan. I wanted to bring all 26 dolls home, but could not find them all, but did bring these 2 minority dolls home with me.

I wanted my daughters to have dolls that looked like them to play with, so I was in search of Asian dolls. I have purchased many Asian dolls play line dolls, but today, I am focusing on the Chinese dolls I purchased for my collection. These dolls have been kept in their original clothing and bodies and are kept in my glass case where I keep my collector dolls. 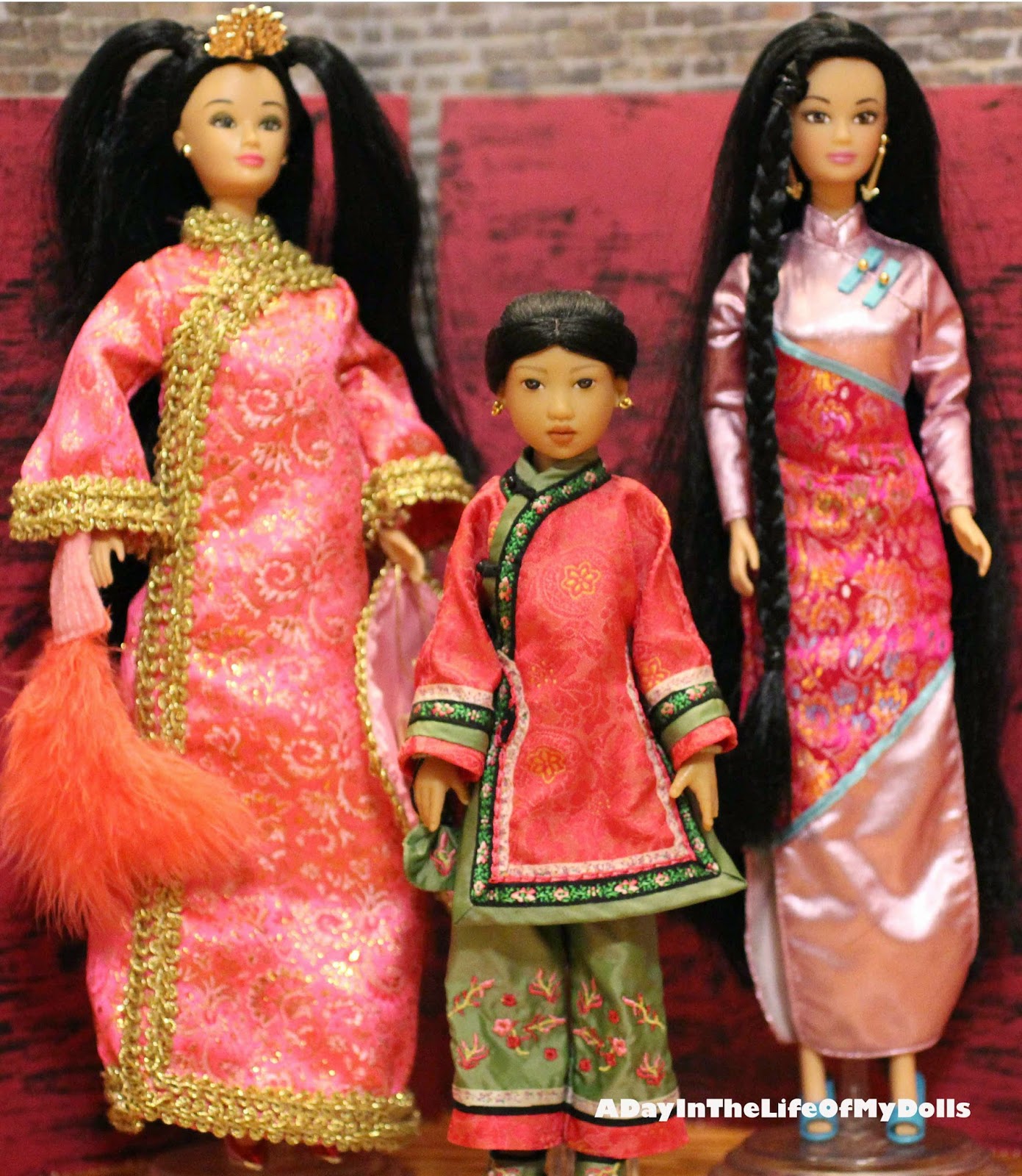 The first up is a Yu Sai Wa Wa Chinese Princess doll, the center doll is an American Girl Girls of Many Lands Spring Pearl doll, and the last doll is a Yu Sai Wa Wa Long and Lovely doll. Yue Sai Wa Wa was developed by Yue Sai Kan so that Asian girls could have Asian dolls. I purchased mine from a Chinese import company called China Sprout. These dolls are now popular and available world wide from Amazon and can also be found on QVC and eBay. 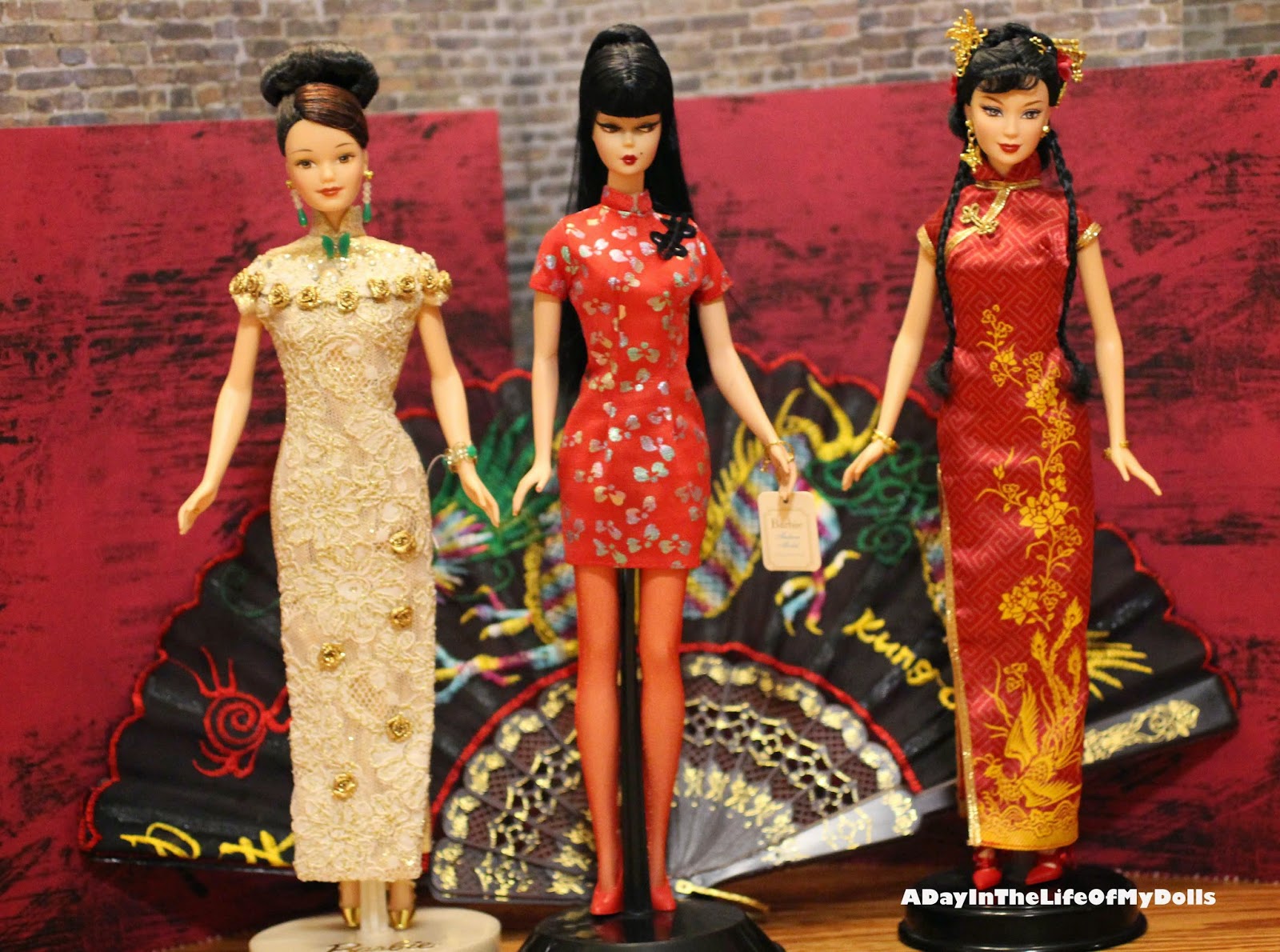 Now for some Chinese Barbie dolls. 1st is the 1998 Golden Qi-Pao Barbie, next is 2004 Silkstone Barbie Chinoiserie Red Moon, 3rd is 2005 Chinese New Year Barbie. The fan in the background I purchased in China in 2001. 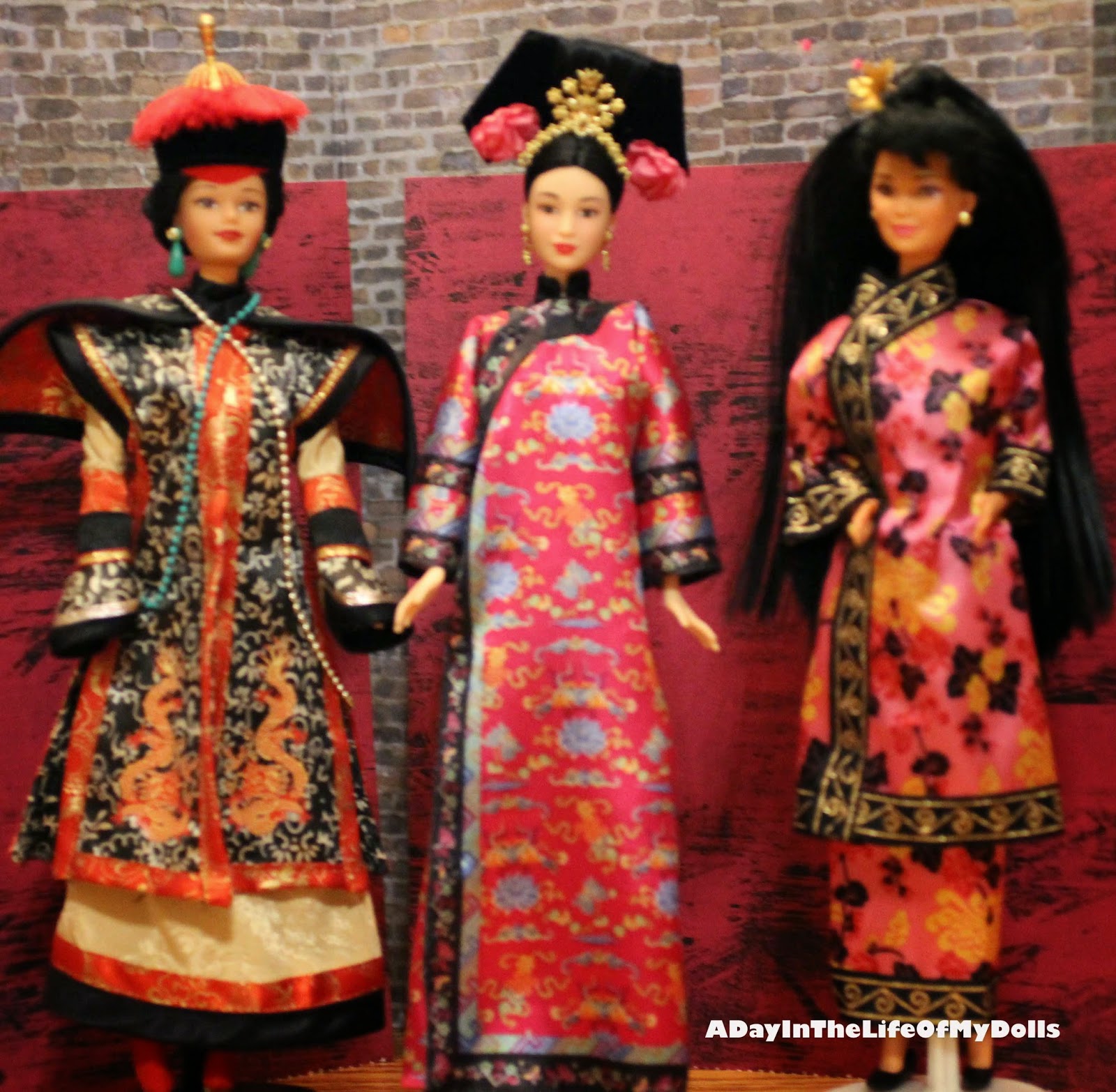 These are all Barbie Chinese Princess and DOTW dolls. The first one is 1997 Chinese Empress Barbie, next is 2001 Princess of China and 3rd is 1994 Chinese Barbie doll.

Yeah, I know I said I was gonna have to curtail my doll buying. But, I got a gift card from Amazon from my daughter and I had some Discovercard credits that I just had to use up on Amazon! So, of course, I spent them on some new dolls. Here is what I got:


These dolls all come in bathing suits with coverups and sandals. Barbie has a big hat. they all have articulated arms, but they have stiff legs with flat feet.


Don't they look cute? I think I like Grace's outfit the best, but I also really like Summer's pants.


Sorry this picture is a bit blurry, but the sandals are all really cute too. Again, I like Grace's the best. I also think the little black ones that Barbie is wearing are really cute too.


I was disappointed to see that Ken's outfit was all one piece. I like for him to have separates as it gives you more options. I do like his glasses, but they stick in the side of his head. I cut off the little barbs that held them in place. Since he has a completely stiff body, I don't plan to keep him, just his clothes and glasses.

I like Nikki's outfit, but her hair is not the best. It is uneven and kind of snarled. I will probably give her a shampoo or maybe a boil perm and try to restyle it. Oh, she also came with a pair of little black boots.

I really like Resort Style Grace with this body. I also love her hair. She may be my favorite Grace now!

Well, that is it for now!

Thanks for stopping by. I love getting your comments!

A while back, I showed you all a picture of my Society Hound Barbie who has been renamed Penelope Elizabeth Winthrop Carter. I teased a little of what her story would be about - some mystery, some tragedy. I am still working on the dios for the first story, but I thought I would introduce her family and give you all a little background so as to set up the first episode of her story! Here she is with her children:


Penelope is the eldest daughter of Elizabeth Anne Winthrop and Herbert Michael Winthrop who are a very wealthy and prestigious family in Hanaly Corners. They were the principals of a large conglomerate of companies dealing in commercial real estate, manufacturing and financial services. Their company, Winthrop Enterprises was a major employer in Hanaly Corners. They also have another daughter and son. The Winthrops are pictured below:

The Carters were another very wealthy family in Hanaly Corners. They were the principals of a large firm that specialized in Engineering, Architectural Design and Technology. Carter Design & Technology Corporation was also a very large employer in Hanaly Corners.

The Carters have 2 sons and 2 daughters:

In 1984, Mr. Carter and Mr. Winthrop, who were friends, started talking about a merger that would combine their companies into the single largest employer in Hanaly Corners and set the stage for expansion along both national and international lines. As part of the merger discussions, the two men had decided that having their two eldest children married would seal the deal. They set about "introducing" Penelope and Sam Jr. Throughout their courtship, they were strongly urged by their parents that their marriage would be in the best interest of both families. Two years later, Sam and Penelope "sealed the deal" and were married in an extravagant affair that all of the high society members of Hanaly Corners attended. The companies merged and became Carter-Winthrop Enterprises, Inc.

Penelope and Sam had become very good friends during their courtship. While they knew that their marriage had been arranged by their parents, they made the best of things and knew that they would be expected to produce heirs. Penelope became pregnant within the first year, however, she miscarried the child. What she discovered during this time was that Sam was a very caring and attentive man. He grieved the loss of the child with her and this drew them closer together. He did everything he could to comfort her and to make her feel wanted. Soon, she realized that she really was in love with him and he saw her as his fragile, precious princess and knew that he was hopelessly in love with her. In time, she was again pregnant and during this pregnancy, he watched her closely and they were blessed with their first child. They were so happy and excited that there first born was a son! Charles Herbert Carter. 2 years later, Danielle Theresa Carter was born and 2 years after that, they gave birth to another son, Callum Michael Carter. 10 years ago, both the senior Samuel Carter and Herbert Winthrop retired leaving Samuel Elliot Carter III as the President and CEO of the company as he had been groomed to be. Many of the family members are also executives in the company and both Charles and Danielle hold positions with the company.

Two year ago, Sam took off on a private jet with his Director of Manufacturing to look at a site in Mexico. There was a terrible storm and the flight never arrived at its destination. It fell off of the radar and to date, there has been no trace found of this ill-fated flight or its passengers.

I hope you are intrigued by this introduction! We will pick up this story with a family meeting to discuss matters of Sam's disappearance! Stay tuned.