Last But Not Least!

OK, so I am finally getting around to posting the last items from the IT Convention! No fanfare, no big intro, I am just going to get right to the photos!


The final event of the convention was the Gala! It was an event that did not disappoint. Jason Wu was there and he shared his history with first the dolls and creating Fashion Royalty and then on to becoming a name in the fashion world, including the designing of dresses for the current First Lady, Michelle Obama! Even Hannah was excited that we got to see him. Here are few photos from that night's presentation: 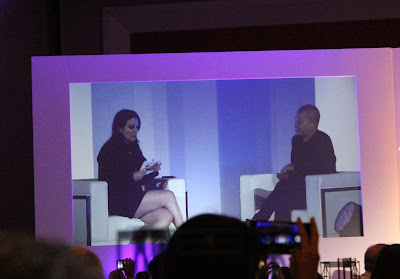 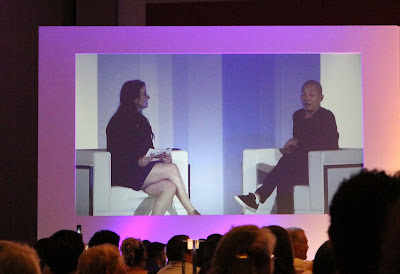 The centerpiece doll for the evening was a grand entry!

Both Hannah and I had our number drawn so we each were able to buy her. Her dress is impeccable, and the  neck piece opens in the back so you can remove it without taking the doll's head off. In my opinion, she is absolutely stunning!

And, so as not to be outdone, they presented the final giveaway doll and the Official Convention Doll:

As with the 4 other dolls in the Convention Collection, she came with a casual dress and boots too. Hers is pink.

And if that was not enough, Jason Wu presented the final surprise of the night. A new doll he had designed available only to Convention attendees. Here is her promo photo:


As convention attendees, Hannah and I both purchased her and are awaiting her arrival.

We also stood in line for the photo op with Jason Wu. He even signed our Convention doll boxes (1 each!). Here is the photo: 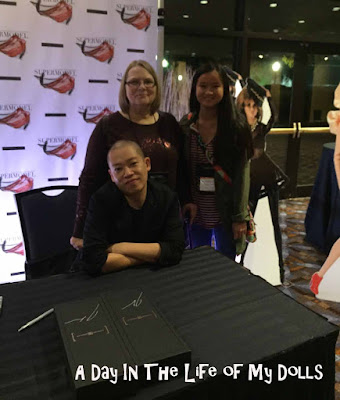 After the convention, we were also afforded the opportunity to purchase any of the convention dolls that were remaining in stock. I did buy 2 more of the Style Lab dolls: 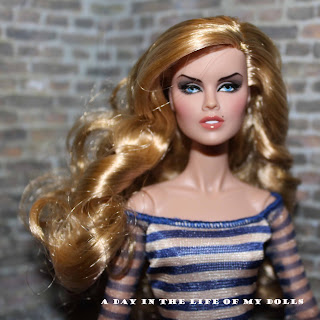 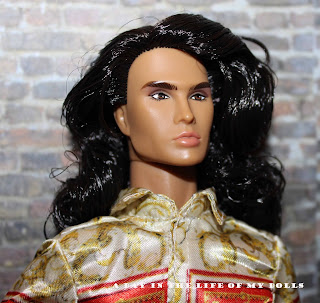 I know this took me longer than expected, but I hope you still enjoyed the long, drawn out presentation of my convention experience.  Not an event I will forget any time soon! Again, if you are keeping count, this adds 5 dolls to the 2016 Supermodel Convention doll purchases. That is a grand total of 27 dolls added to my collection! Wow, this is staggering to me! Have I been a bad girl? Well, in the grand scheme of things, I did save for this. I may never get another chance to do this (even though Hannah is campaigning to go to Orlando in 2017!) I am very happy with these purchases too and I got to check another item off of my bucket list!

Thanks for reading! I enjoy getting your comments, too, so don't hesitate to drop a line.
Posted by Phyllis at 10:15 PM 16 comments:

Some New Residents in Hanaly Corners!

I know you have seen my new Tobias Alsford doll from the IT Convention, but I have given him a new name and he has met his dolly match. He is now Tyson Alsford (Tobias's brother) and he found his love in Lavinia Auclair. 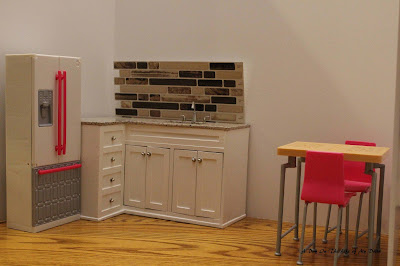 During the Black Friday and Cyber Monday/Week sales, I was on Barbie.com and I did purchase a few new things! I was able to get some of the new Fashionistas. Here is the new AA Ken Fashionista #5, Hip Hoodie! 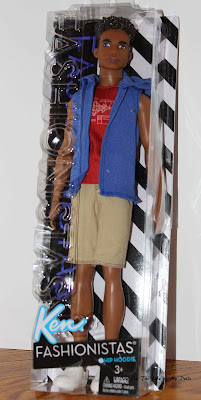 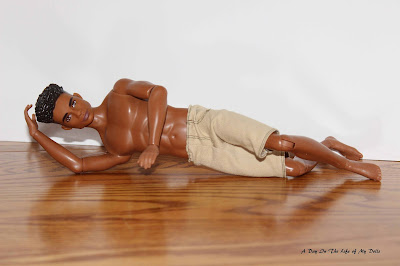 He is really liking this new body! He is Demonte Auclair, Lavinia's 17 year old son!


Well, that is it for this post. I am also preparing the final post from the IT Convention which I was supposed to get out weeks ago! Well, we have been busy. I have embarked on a project to get my house and my dolls organized. We are cleaning out boxes of stuff, some doll related, some not. We have shredded tons of old paperwork, moved furniture and put together a doll house. We will be getting our main level painted in January, so I need to organize and purge as much as I can before the painter comes. I do as much as I can, and it feels good as we have made some big accomplishments! I feel that if I can get myself more organized, I will be able to finally get dios put together so I can create more stories which I do want to do!

See you all soon!

The IT Super Model Convention - We Are Back (Part 3 -- Finally)!

Well, we now have the new furnace in and good thing as it is getting cold here! It is supposed to snow this weekend. We will be nice and cozy warm at home with this new furnace! Anyway, I thought it was about time I did my next post from the IT Supermodel Convention.

First I will show you the dolls I got at the Style Lab. I mentioned these in my 2nd Convention post, but did not have photos of them yet. Here goes!


Next up are the 2 grab bag dolls I purchased. Actually, I had gotten one for Hannah and one for me, but Hannah did not like either one of them. She "gave" hers to me. To be honest, I was pretty disappointed in them both when I first opened them up. I did not like the dresses they were wearing, so I thought maybe I would like them better if I redressed them in clothes I bought on the last day when you could go back and buy whatever was left. I am kicking myself now that I did not buy Laka O'rion and Blue Burkhart from the Style Lab. They were so gorgeous, but I was trying not to spend too much! Here are the grab bags dolls after they have been redressed.


We had gone to a couple of the private sales rooms while waiting for the Thursday evening event and I purchased just one doll. She was a grail doll for me, so I was so excited to be able to get her at a reasonable price! She is a Unoa doll!

Later in the week, Hannah settled on purchasing the Erin from the 2014 Convention (she was the Welcome Bag doll from the Gloss Convention). She had seen her in the same room as the seller I purchased Unoa from, but she had on mismatched shoes and an outfit Hannah didn't like so much. She was priced fairly high, so Hannah wanted to wait. We found one in perfect condition the next day, and she was $15 less than the first one and she was in her original outfit! I was very proud of my little girl! Here she is!

Friday night was the Bazaar where there were a lot of table sales. We didn't buy any new dolls at the Bazaar, but we did get some clothing and other accessory items. I will post a  photo of these in the last post with the table gifts.

Saturday was a huge day! The Saturday luncheon was the Exclusive W Club Luncheon. As not everybody at the convention is in W Club, this luncheon is just for members. Since Hannah is not a member, she stayed back in the room and worked on her homework and ate lunch. This event did not disappoint. I was seated with new tablemates, but did see a few people from my convention table at the event. Here are a couple of photos from that event! 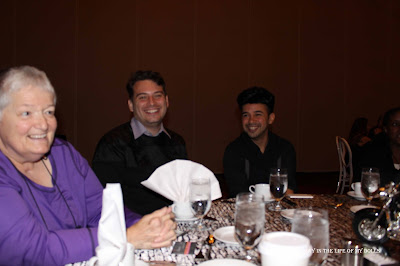 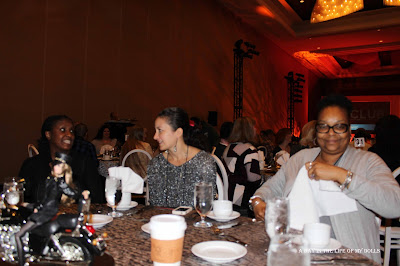 There was a Q&A panel with the IT designers and they answered many questions that had been previously sent in by W Club members, even if they were not able to attend the convention. A key new bit of information was that after all of the negative comments they had received about the decal eyes, they were immediately going to discontinue the use of them. They are still searching for a more economical way of applying the eyes, so we will have to wait and see what they come up with.

Here are some photos from that event: 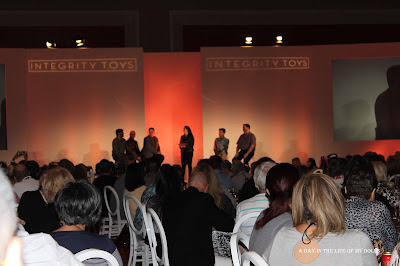 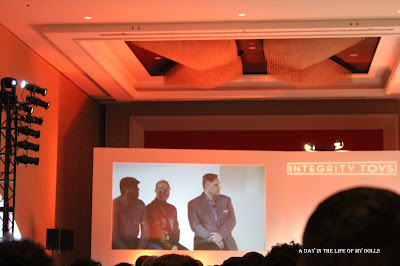 Before we left, we were presented with the W Club Luncheon Giveaway doll.


OK! I think that is it for this post. Again, if you are keeping track, this adds 3 new dolls for me and one for Hannah. We had already included the 3 male Style Lab dolls, the 2 grab bag dolls and Unoa for a previous total of 19. Adding the 2 W Club Luncheon dolls and the Dree Hill doll now makes a total of 22 new dolls from this convention. In the next post I will show you the final dolls from the Saturday night Gala finale and the stuff we purchased from the bazaar as well as table gifts we received.

I have a few more photos to take, so I will see you in a day or two with the final convention post!

Well, better late than never, right?! I have gotten my new computer up and running and have downloaded the latest upgrade of Photoshop Elements to do my photo editing. I have taken many photos and managed to even get a few Halloween photos. Without further ado, here is my little Halloween photo session:

I hope you all had a fun Halloween!