In the midst of all my doll buying, my Lammily Photographer doll finally came. I ordered her a long time ago -- I can't even remember when. I ordered 2 of them, but I probably would only have ordered one if I had known at the time that Barbie would be coming out with the Curvy body. Here is a picture of my 2 girls. 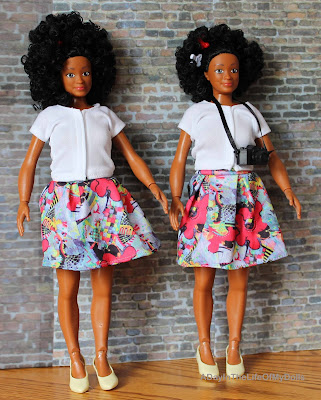 OK, so they are nice dolls. They have the same bodies with limited articulation as the original Lammily. The outfit is rather frumpy in my opinion and the shirt seems to be on backwards. I had heard that the delay in getting this doll out was due to waiting for the camera. Well, I was not impressed with it. The camera in the prototype photos had much more detail. It had details colored in gray. The production camera is all black and the straps slip through very easily.

When the original Lammily was released, there was a lot of discussion and feedback to Lammily about the limited articulation and the doll's inability to sit gracefully. Lammily responded that they would be working on the articulation and on making her joints more flexible so that she could sit more gracefully. I am disappointed to see that they have not changed a thing.

Below is a closer look at both dolls heads: 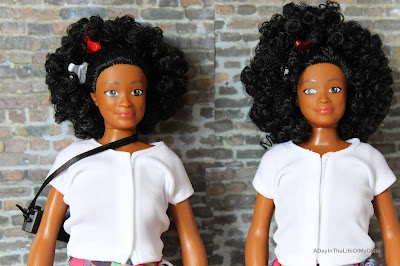 Notice that the doll on the right has much more voluminous hair that the one on the left. It is much fuller and her hair clips are barely visible. Her face looks a little slimmer to me, but it may just be an illusion because of the hair. This does not bother me in the least as it makes them look a little different. Fortunately, this doll can share clothes with Katie (my original Lammily). I am not sure what Photographer Lammily will be named. She just isn't speaking to me right now and my interests have definitely been leaning heavily on the new Barbie body types and the MTM bodies.

Thanks for stopping by! I love getting your comments.

In my previous post, I told you that even though I haven't posted to my blog in a while, it doesn't mean that I wasn't doing my part for the economy. I have purchased just a few new dolls!

The new line of Barbie Fashionistas has definitely been quite a nice surprise. Here are some of the new dolls I have purchased in the last couple of months.

Perhaps one of the first things you will notice is that they all have been rebodied. None of these come with articulation in their original state. The first 3 ladies received Made to Move bodies, while Lacey Blue got a body from the Barbie Look Urban Jungle doll. I am not one to dilly-dally when it comes to having articulation for my dolls. While I love the new body types, I have enough other petite (like Momoko) and tall (like Fashion Royalty) dolls that it doesn't matter too much to keep those body sizes. On the other hand, I do love the Curvy bodies, so most of those still have their original bodies.


All of these ladies are on MTM bodies. The Geometric Print gal is wearing a new Barbie Fashion and Fab Fringe and Effie are wearing Sparkle Girlz clothes.

They are all on Made to Move bodies and wearing some of the new Barbie fashions. So Sporty was originally a Curvy girl, but somehow, she seemed to be screaming for a MTM body and I a glad I heard her! She looks awesome on this body.

They are both in their original outfits. Party perfect is on a Lea headmold and I think she really looks great with this hair color.

White & Pink Pizzazz in on the Barbie Look Sweet Tea body and the other two are on MTM bodies. Their clothes are all from the new Barbie Fashions.

Leather and Ruffles was on my must have list, but it was taking very long to get her from Mattel. I was able to get her from Amazon. She was a perfect match for the MTM Orange top body, so she got one. They both have the same facemold, so I think I might make them twins, each with their own unique style.

Princess Candy is the first one of the "Anna" facemold that has light blond hair and pale skin. I really had to have her after seeing her photos on Flickr. Crazy for Coral was a perfect match for the MTM Orange Top, so she managed to get one of those bodies.

These ladies are wearing fashions from the new Barbie fashions. They both got MTM bodies as well.

I know that it has been a long time since I have posted on my blog. I am not going to give you all a long story about why, suffice it to say I had a lot going on.

My youngest daughter is currently in Europe on a school trip to France and Spain. We have talked or texted almost every day. She fell in love with Paris! After 4 days there, they moved on to Barcelona and will be ending the trip in Madrid. I am so happy that she was given this opportunity. It was a chance of a lifetime for her.

Even though I haven't posted, I have been reading your blog posts and have managed to comment on many of the posts. I really have enjoyed reading your posts and seeing your pictures!

Thanks to the draw of the internet and online shopping, I have not gone on a buying hiatus. I have continued to purchase many dolls! This could be considered a good thing or a bad thing, depending on how you look at it! I just could not resist the new dolls from Mattel and I think I have most of the new Fashionista's now plus a few others!

The first doll I wanted to talk about is the Misty Copeland doll from The Barbie Collection. I ordered her almost on the moment she became available, but she was very quickly placed on backorder. After receiving 2 emails extending her backorder date, I finally decided to order her from Amazon to take advantage of the Prime free shipping and some credits I had from Amazon. After reading Debbie of Black Doll Collecting's issues with orders from Amazon for this doll, I decided to wait to see mine before cancelling my order from The Barbie Collection. She arrived just 2 days after I placed the order, and she and her box were in perfect condition! Here are some photos:


If you know me at all, you know that I don't leave many of my dolls in their boxes. They always seem to be screaming to me: "Free me from this box please, free me!"  Which I did! I have not removed her costume at this point, but I probably will as I want to compare her body to the Made to Move Bodies. Here are some pictures of her out of the box. 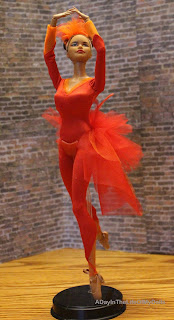 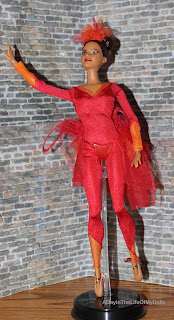 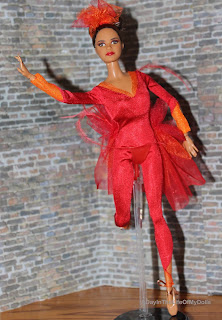 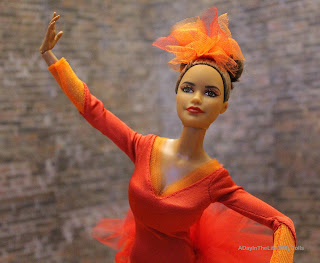 Her body is identified as the "New Ballet Body". She seems to be able to pose very elegantly. Some things I noticed with her ballet costume still on are that she does not have moveable ankles which means her feet are always in point (similar to Alvin Alley and some of the other collector ballerina dolls). Her calves are larger that other Barbie dolls, which is good because she definitely looks like a Ballet dancer. Her costume is well padded around her breasts making them look larger than they are. She does have a very pretty face. At some point, I will probably undress her even though her costume is sewed on. At the point that I do, I will share more photos of her body.

Next up, I also purchased the Wave II Made to Move dolls from Amazon. They are available at Amazon, but I still have not seen them at any of the Mattel sites. One of them is called "Orange Top" and the other is just Made to Move Barbie Doll.

Made to Move Orange Top (very clever name, don't you think?!) She has the Kayla facemold and is very tan. Her skintone is pretty close to a perfect match for Nikki. Did I purchase multiples of her for body swapping? Yup!

MTM Redhead has, well, red hair and freckles. Here faceup is very close to the Western Chic Fashionista. Her skintone is pretty much the same as the MTM Blonde Barbie.

I have been working on doll houses and other diorama items as well as some stories for the future. Story telling is a lot more work than I originally anticipated, but I still hope to more regularly post  stories in the future.

Thanks for stopping by! I welcome your comments.