Progress on the Gordon's Home

I have been one busy little camper for the past couple of weeks. First my daughters and I tackled a big kitchen project.  We installed a glass tile back splash. It still needs a few finishing touches, but I am happy with it.  I will take some pics when it is done.

I have also been busy getting the Gordon's home ready. I have installed some walls and have been making more furniture.

First, here is the finished sofa: 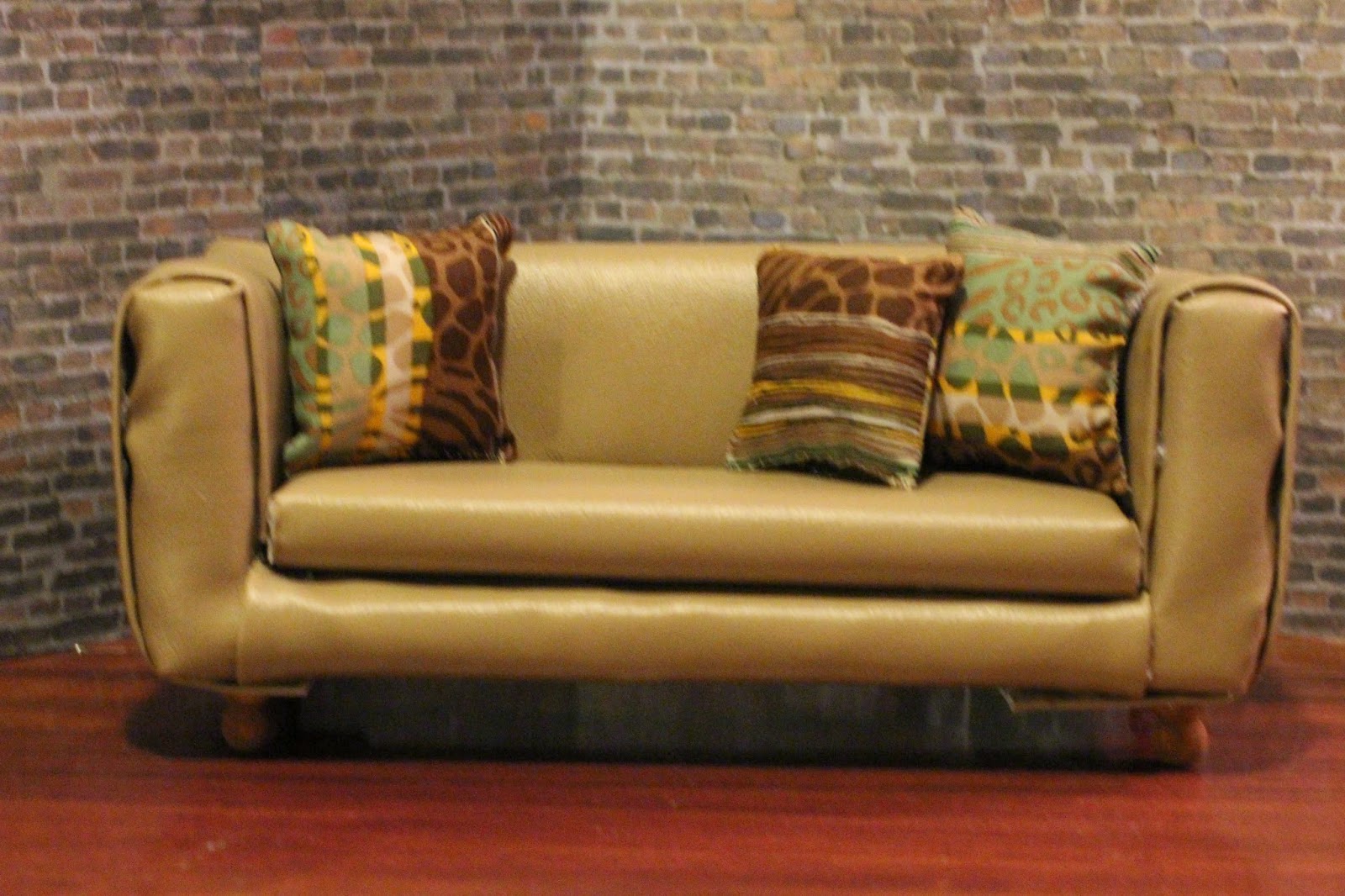 I added feet and made some pillows.

Sharmaine can stretch out on it comfortably: 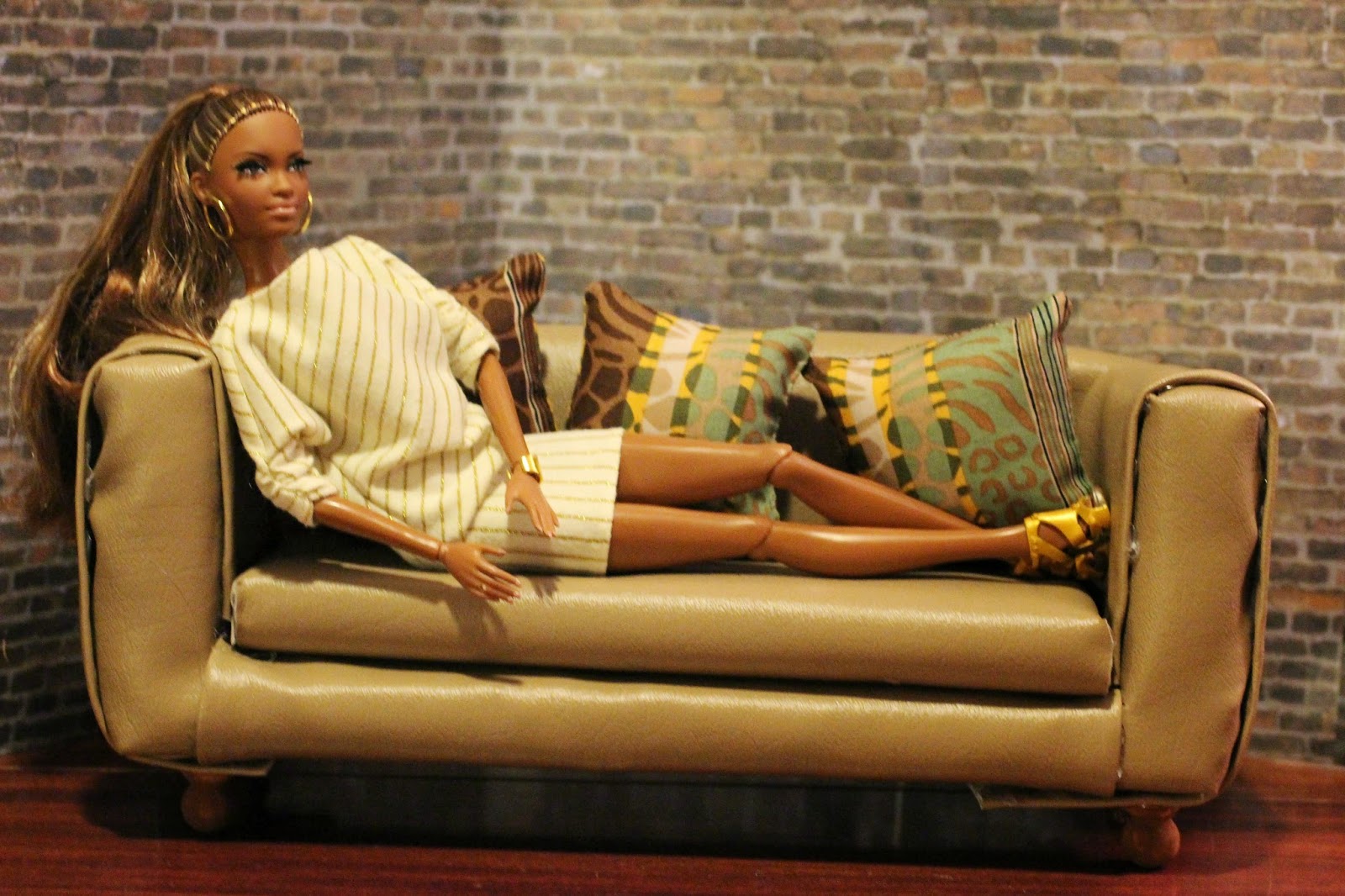 I see a couple of things I could touch up on it, but I am very happy with it.

Next, I made a loft bed for Benjamin. I got most of my ideas for it from My Froggy stuff. 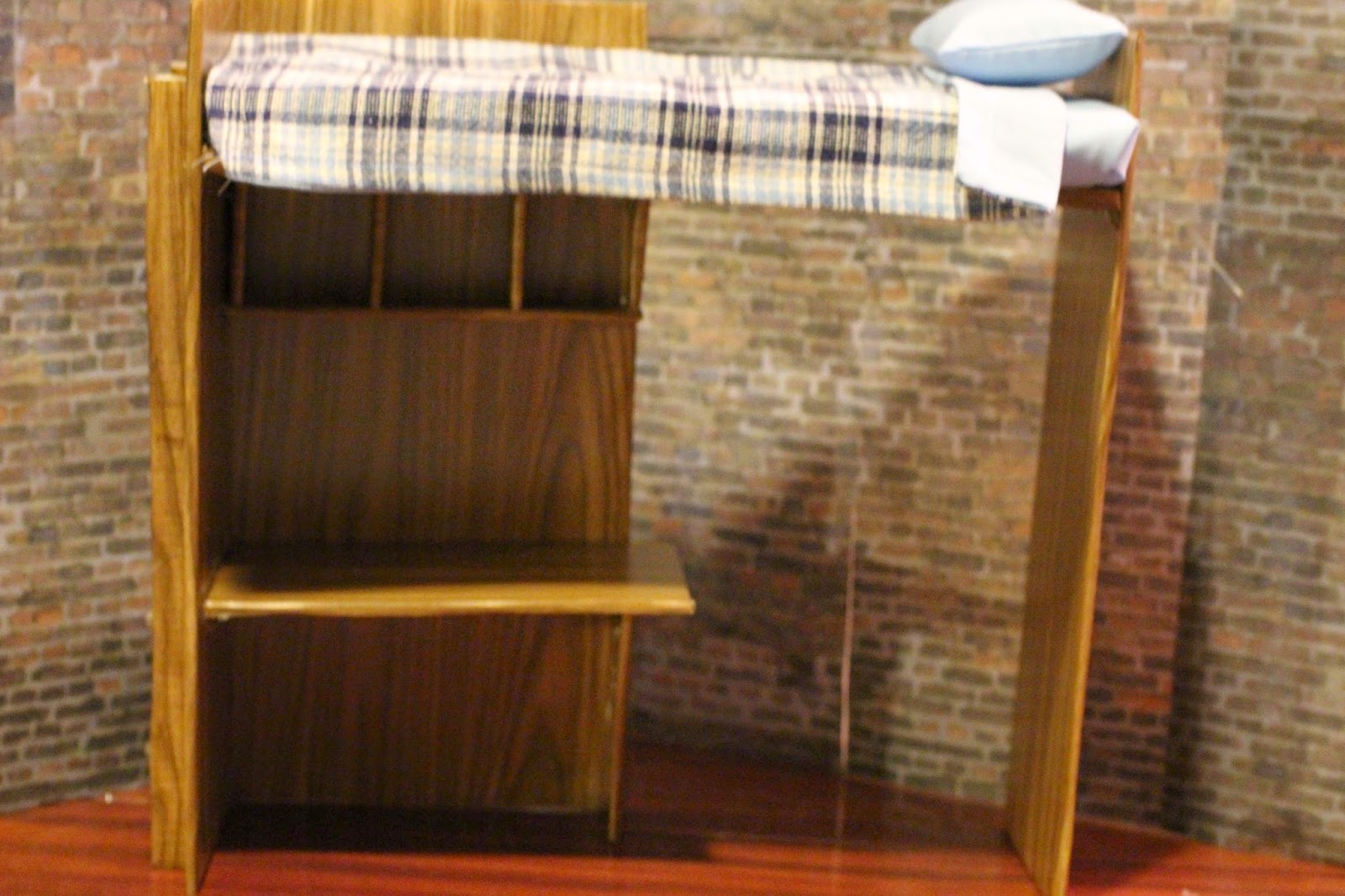 I used the leftover cardboard from the kitchen mosaic tiles. After cutting it to the sizes I wanted, I covered the cardboard with wood grain shelf paper.

Here you see how it will be set up in Benjamin's room: 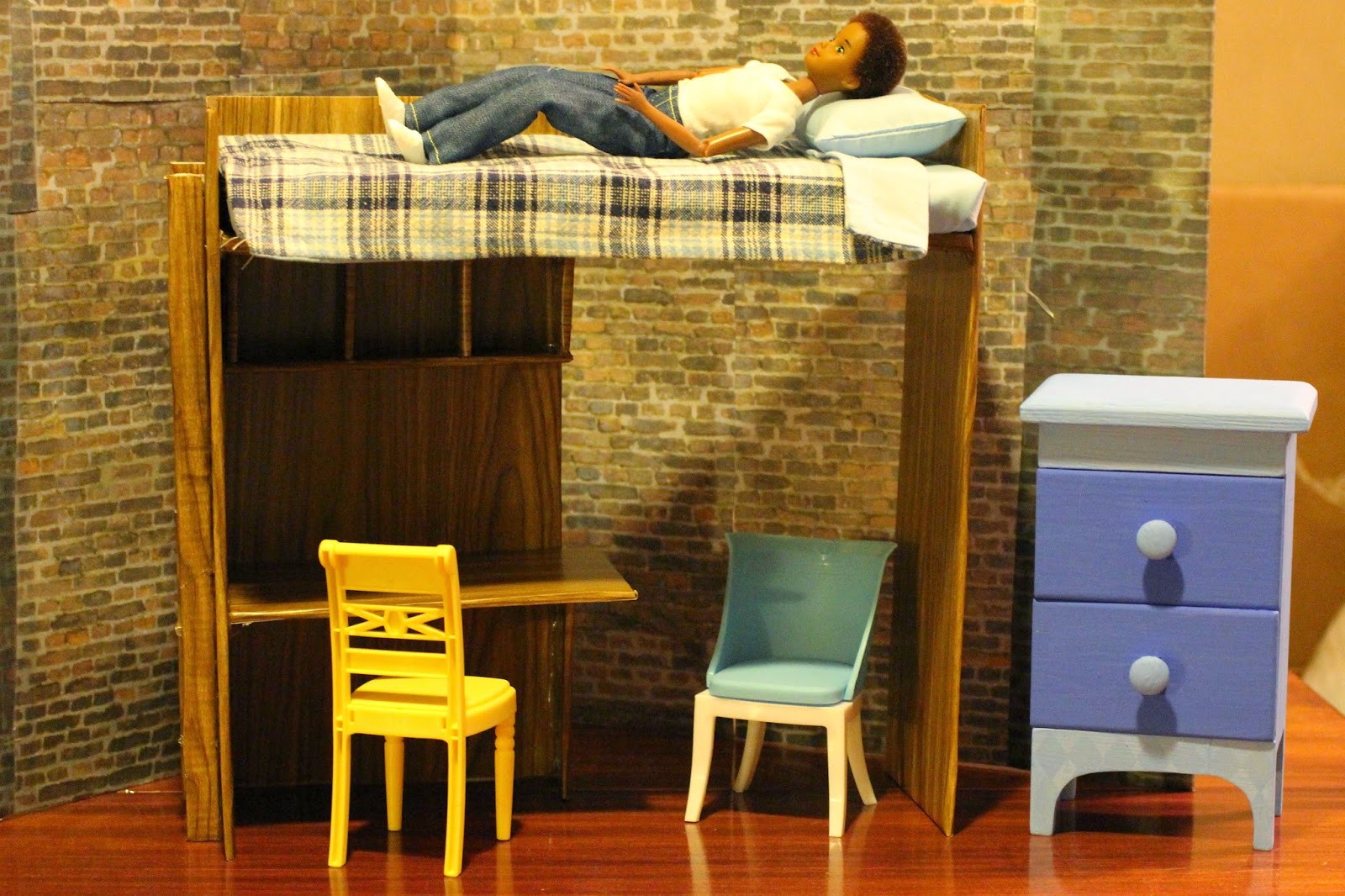 Ben really likes his new bed. His dresser is a flea market jewelry box that I repainted. I made his bedding from left over fabric and the blue plaid fabric is from an old pair of my daughters pants.

Here is Ben sitting at his desk.  He can't wait to get his stuff set up in the new house! 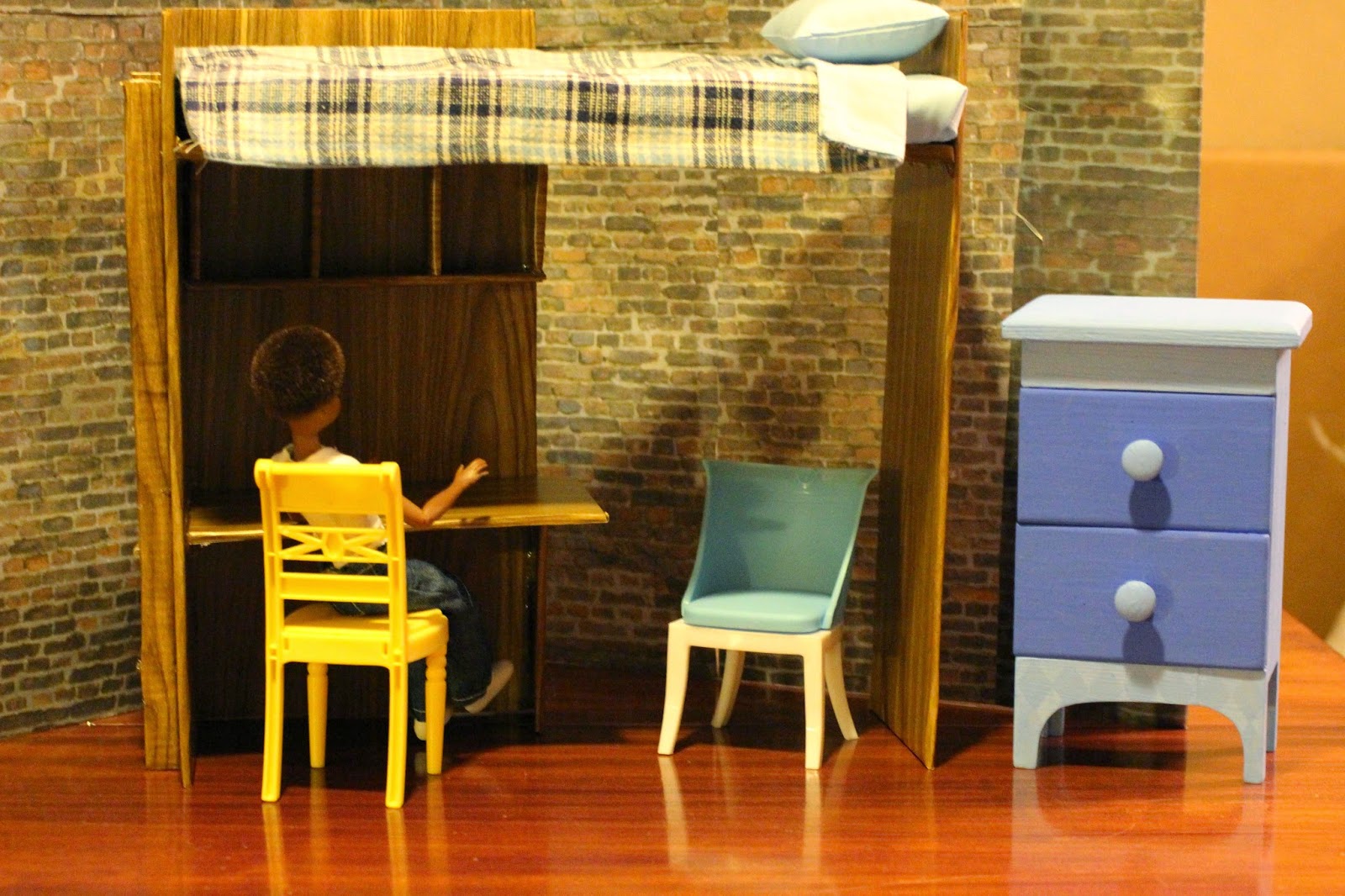 Next, I made a bedroom set for Zoey. This girl is all about pink! 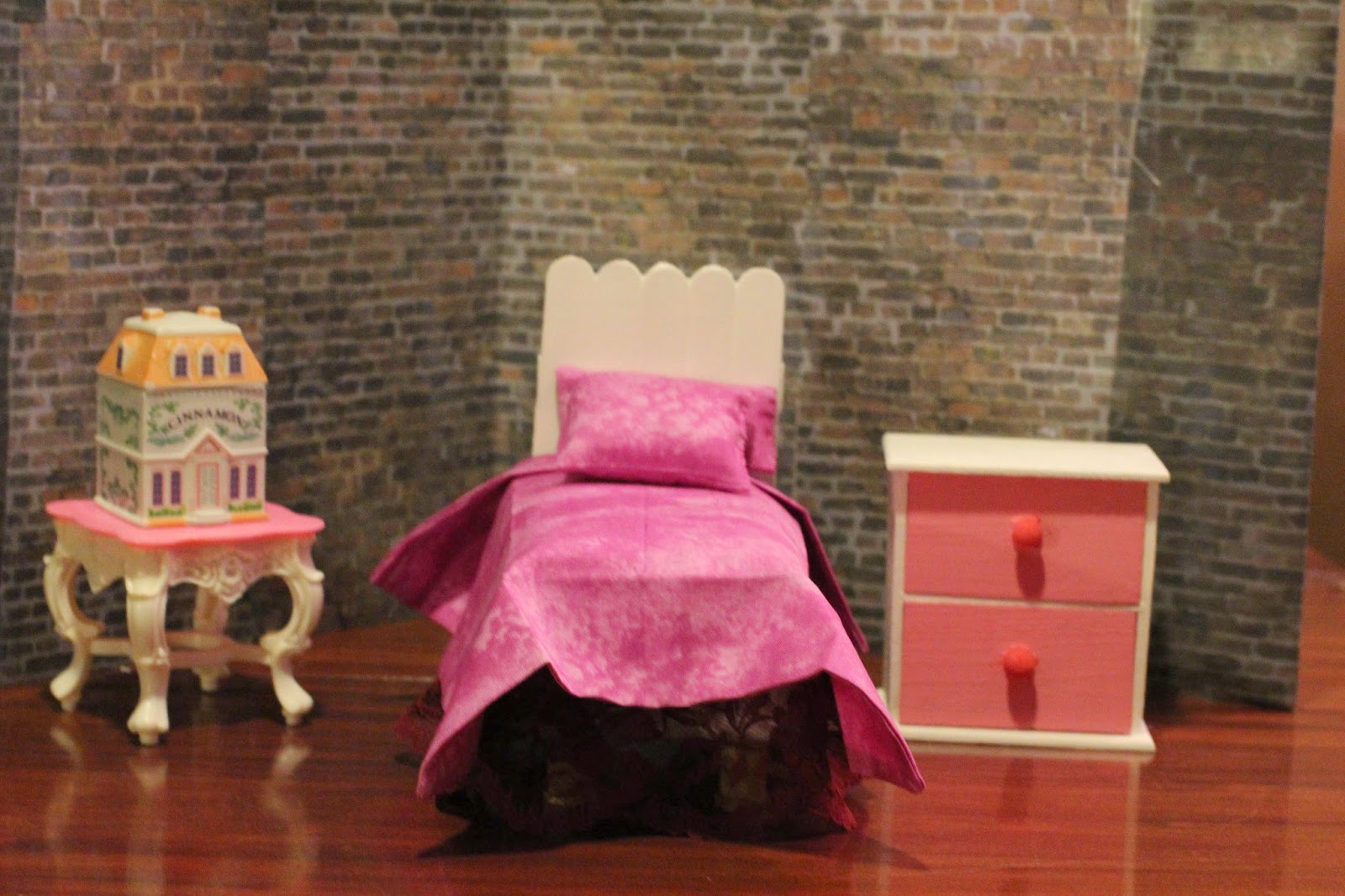 I made Zoey's bed using an old checkbook box as the base. I made the mattress from foam I got at a craft store and I made a headboard using the wide craft sticks and painted them white. The dresser is a small wood dresser from Michael's that I painted. The little doll house is a cinnamon jar I found at Salvation Army.

Zoey is thrilled with her new bedroom furniture: 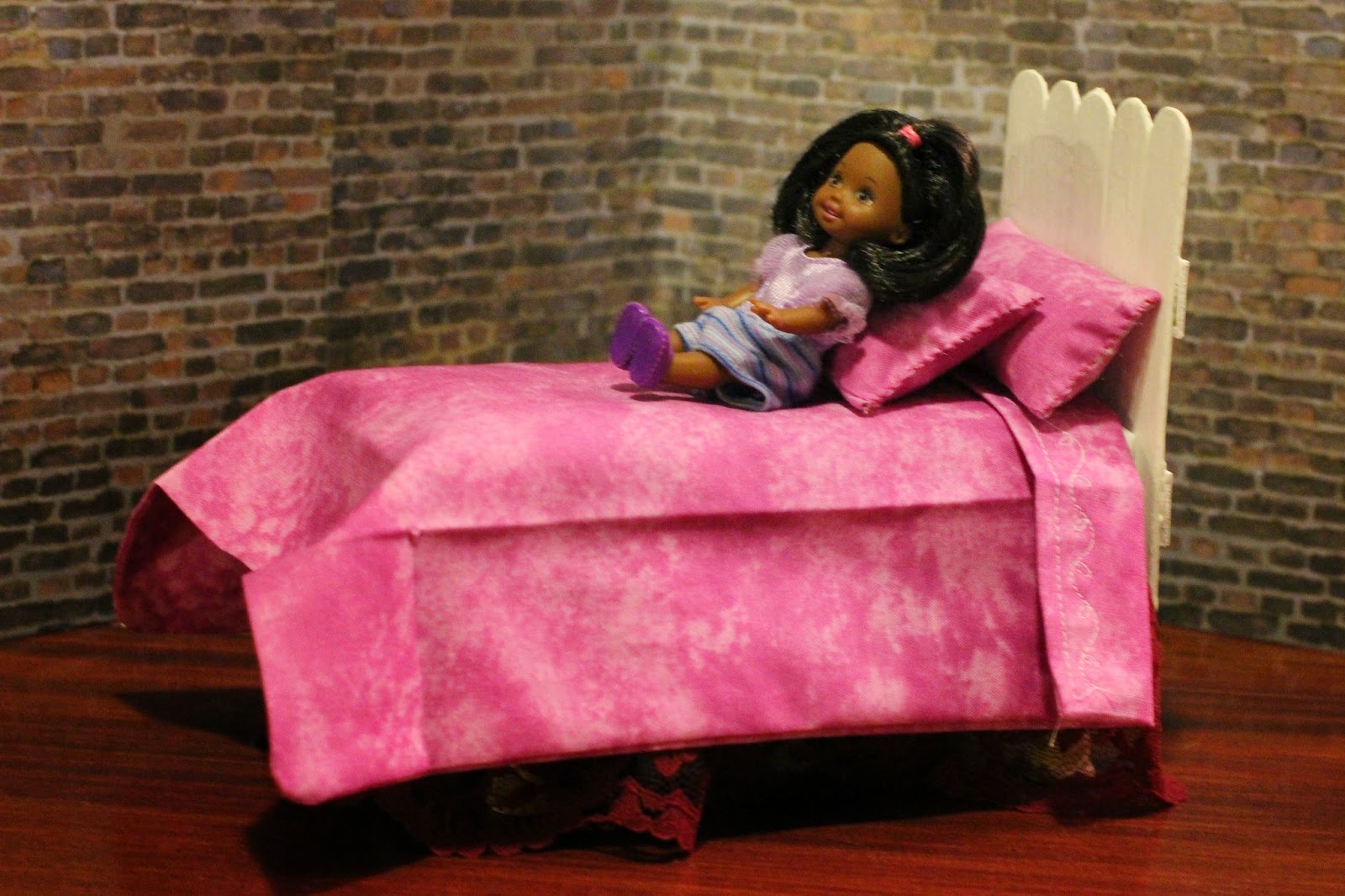 Next up, I made a master bed for Sharmaine and Michael.  I think this might be my favorite of all the beds I have made. I used a  Mixi's doll box for the base and used the same faux leather for the headboard that I used on the sofa. 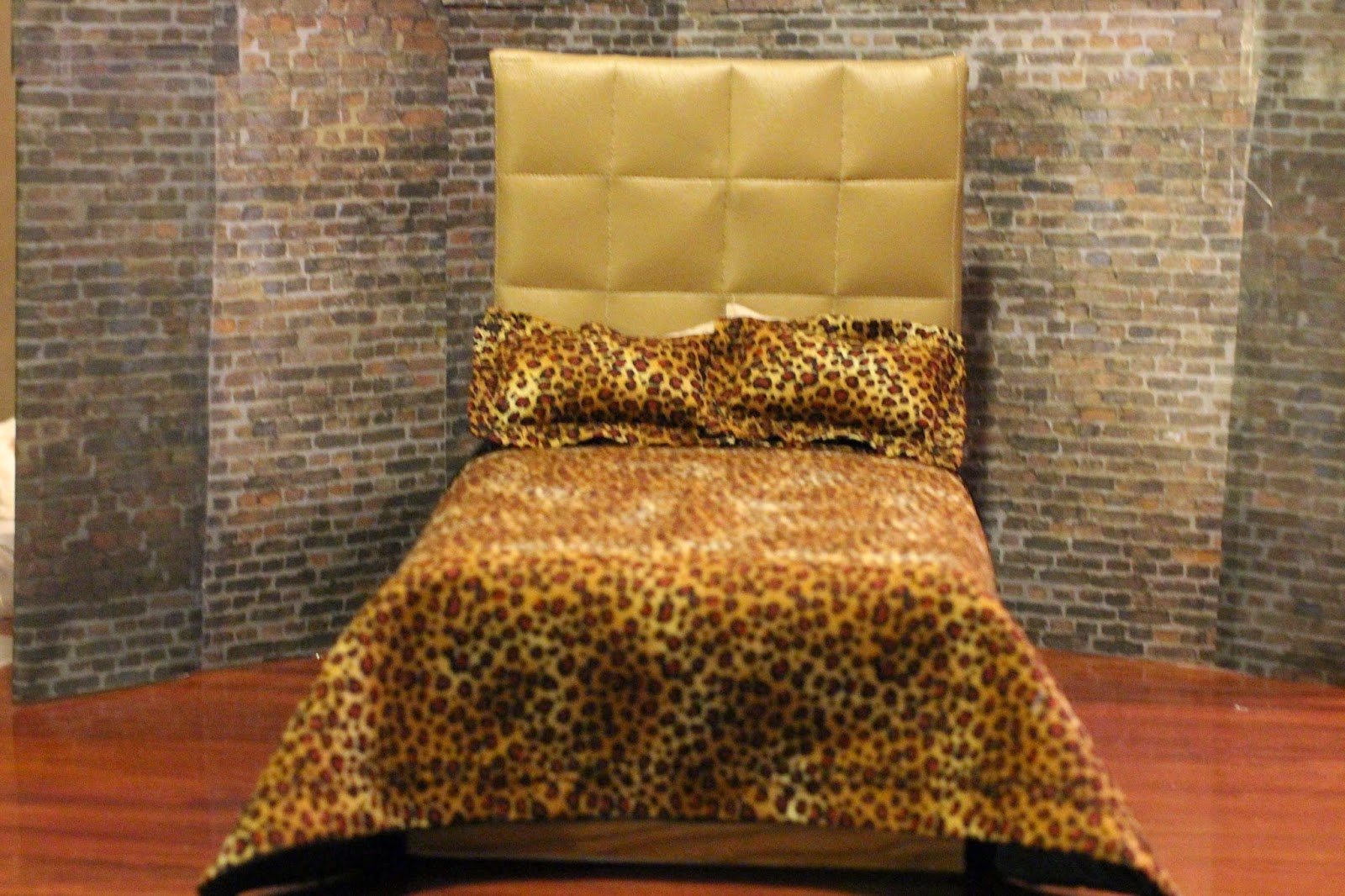 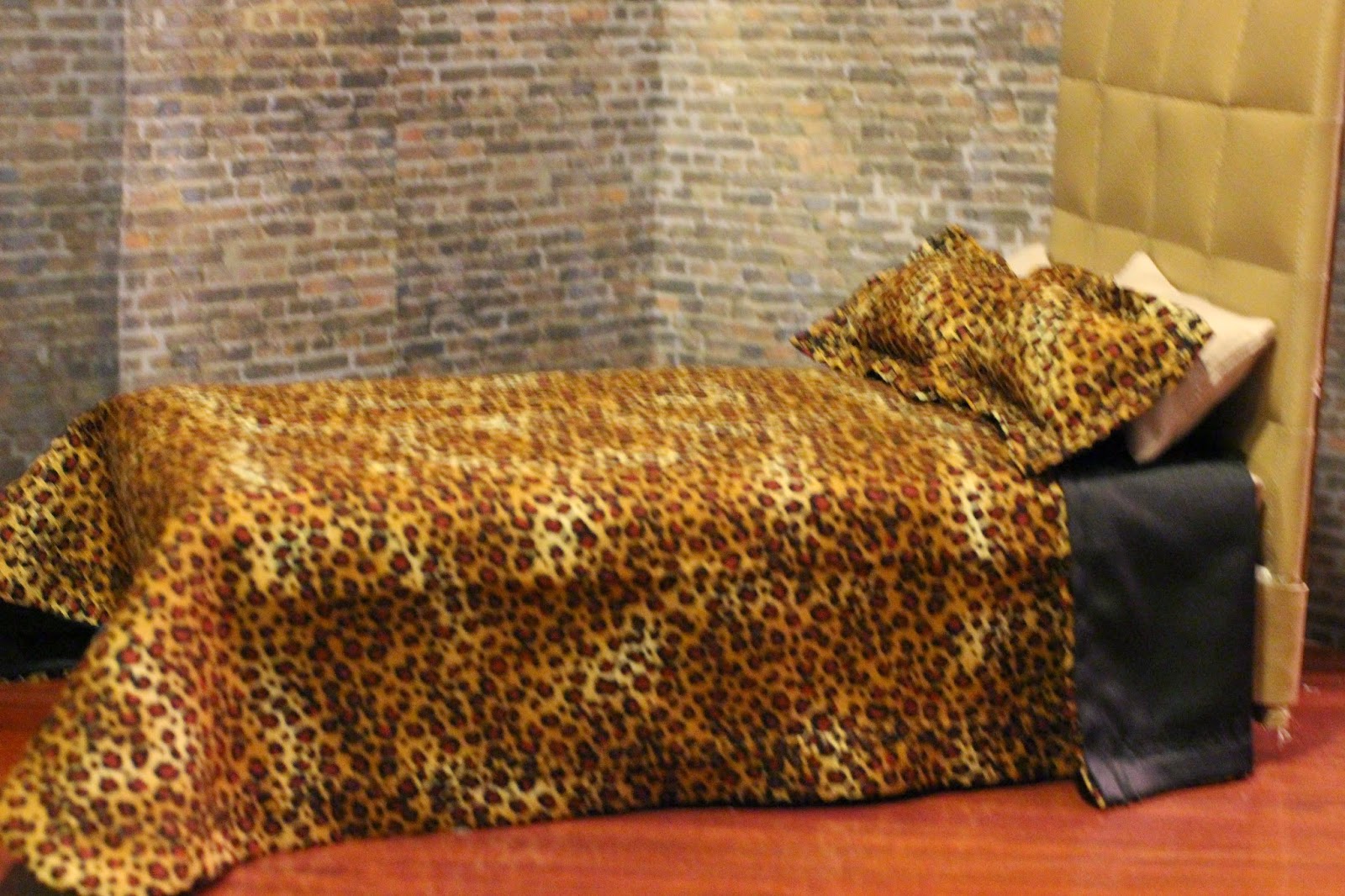 Plenty of room for Michael and Sharmaine to snuggle in this bed! 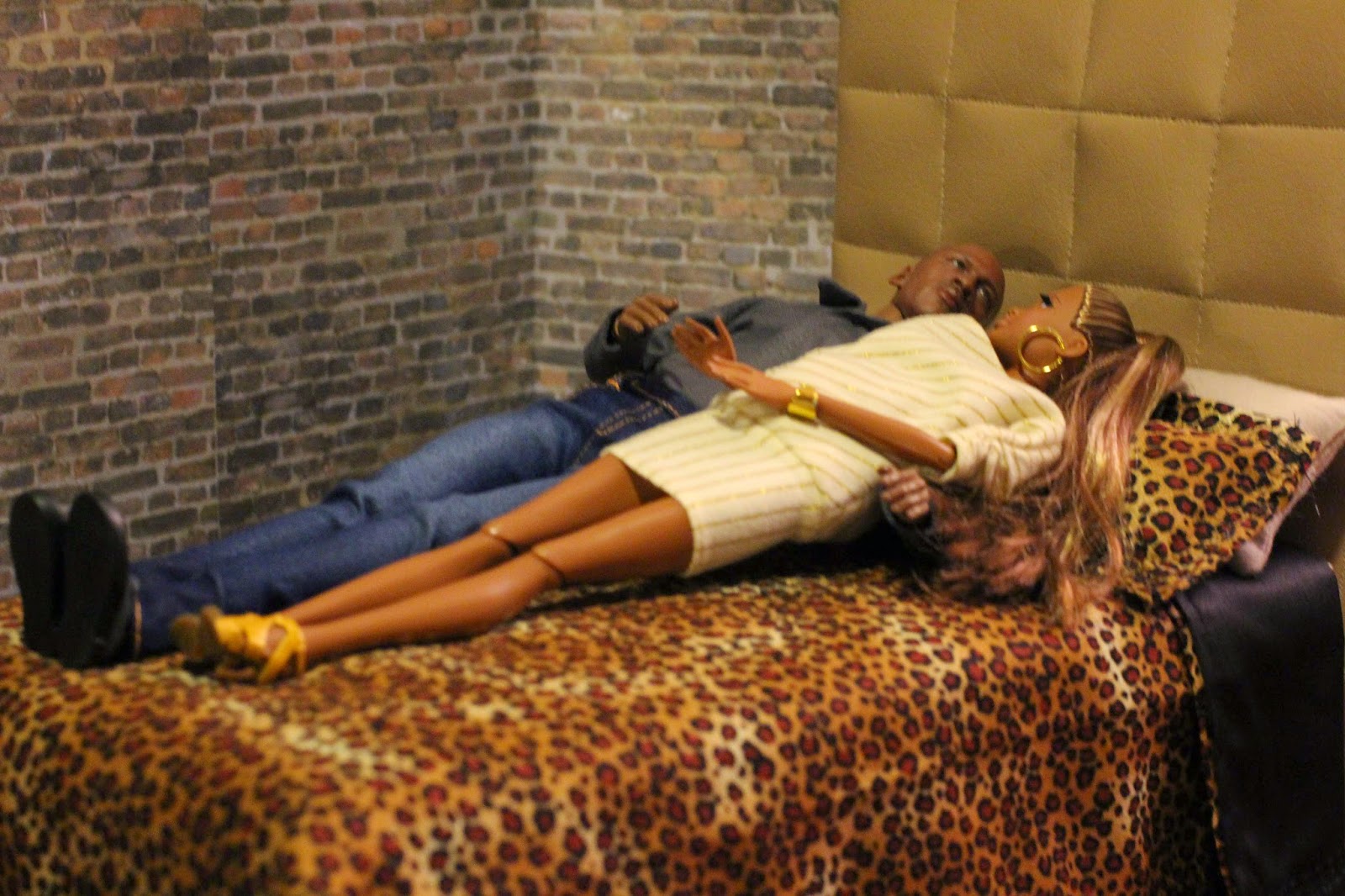 I now need to paint the plastic kitchen and other Barbie pink furniture. Stay tuned for more. They should be moving in soon.

Sharmaine's family is so excited that she is moving back to Hanaly Corners. So now I would like to introduce you to her family. 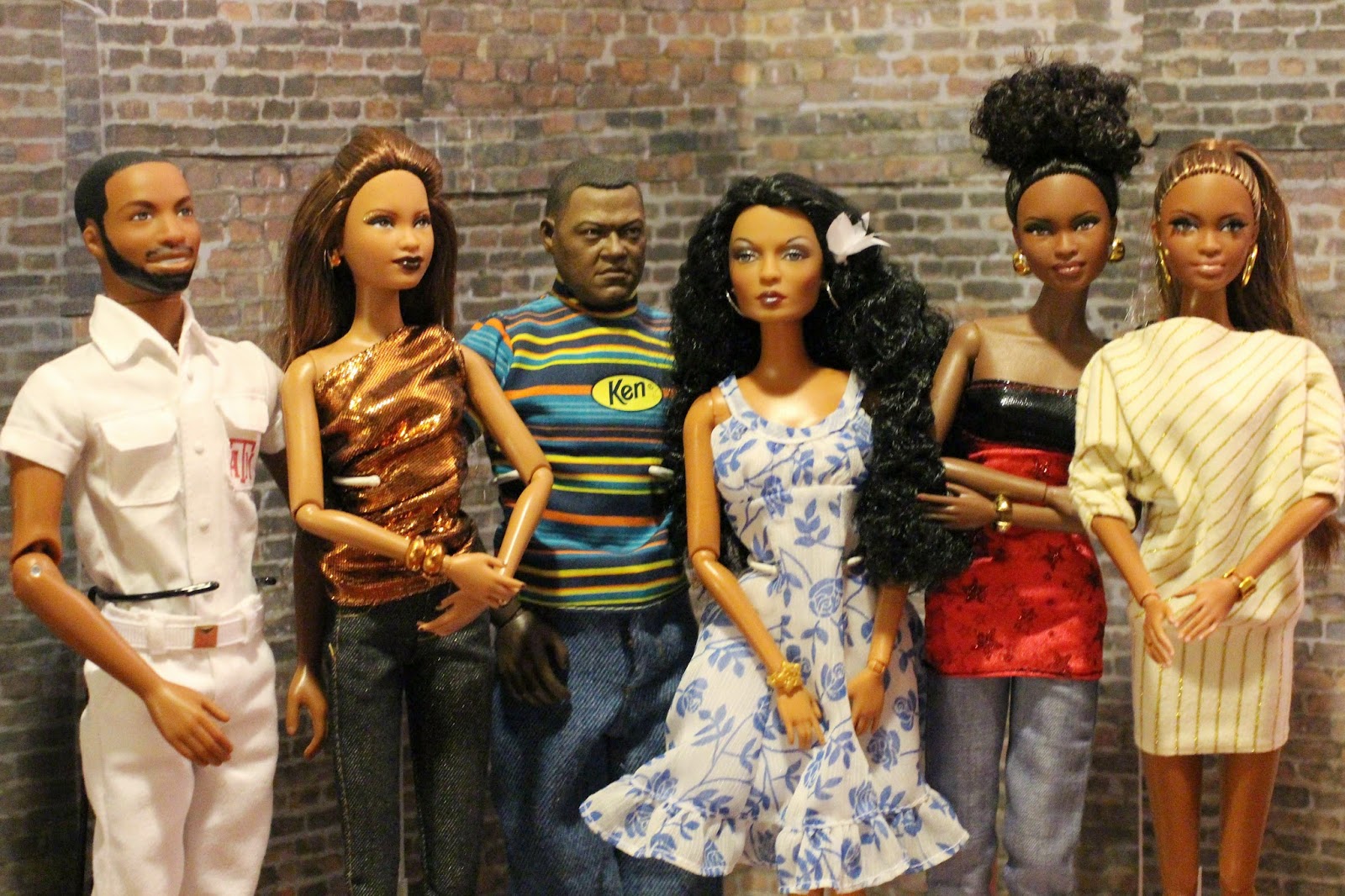 Sharmaine is the oldest of the Fisher siblings. She met Michael in college where he played basketball and then followed him to Chicago where he played pro ball. They got married and then a year later had their son, Benjamin (now 10). They had Zoey just 3 years ago, after Michael stopped playing pro ball. Sharmaine is now 35 years old and Michael is 37. More later on her career aspirations.

Next in line is second oldest sister Shaundra. Shaundra is married to Cade Marin. They also met in college and married right after she graduated. Cade is 34 and he owns a local business (tbd). They have 3 beautiful children. Twins Maya and Macey, age 6 and 1 year old Jasmine. Shaundra is 32. 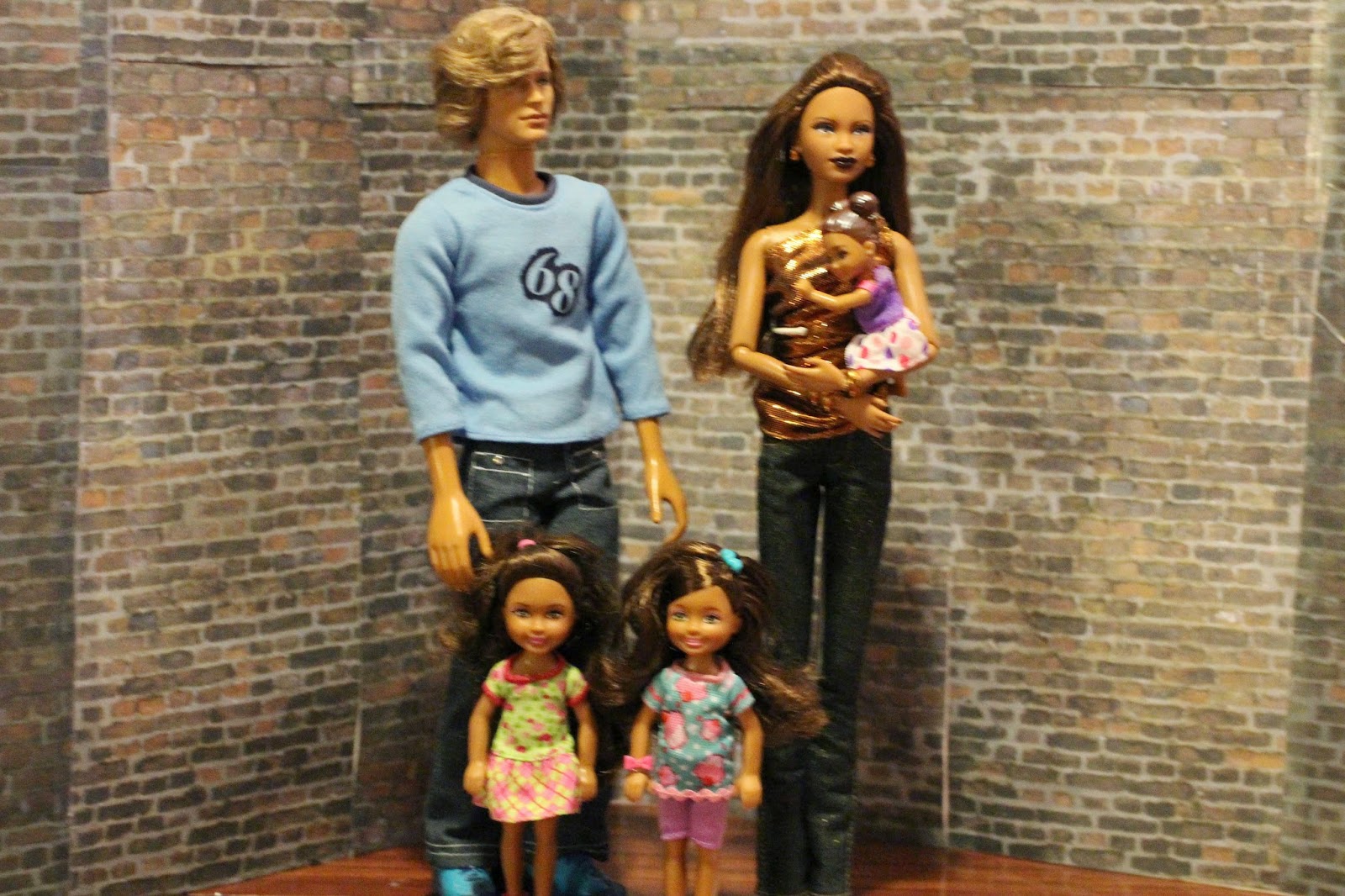 Youngest sister Shayla, age 28 met William Tyler when she was a freshman in high school and he was a senior. He was the high school quarterback and she was a cheerleader. He stayed in Hanaly Corners and went to a local University on a football scholarship. The married a month after she graduated from High School. Many said it wouldn't last because they were so young, but they have been together for 10 years now. They have an 8 year old daughter, Cecelia, 5 year old son Caleb, and 3 year old daughter Ciana. William works at a local car dealership and Shayla works with her older sister Shaundra. They have lived in Hanaly Corners all of their lives. 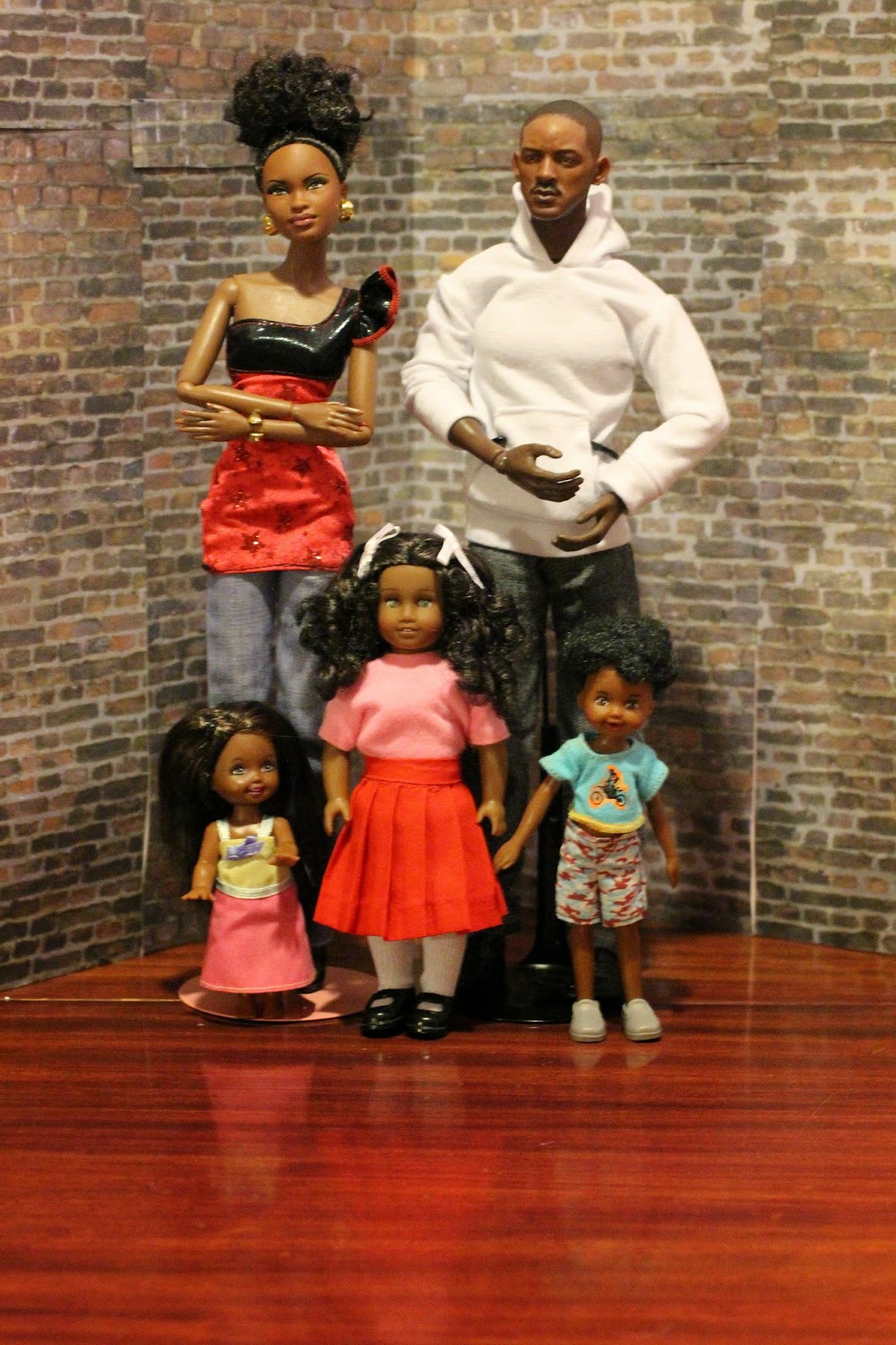 Baby brother Sean is just 19 years old. The Fishers call him their "afterthought" baby. Because he is so much younger than his sisters, they have always babied him and he is a bit spoiled. He attends college locally right now, but may transfer later to a bigger University. Because he was so young went Sharmaine left home, she feels she didn't get to spend much time with him. She is hoping her move to Hanaly Corners will rectify that. 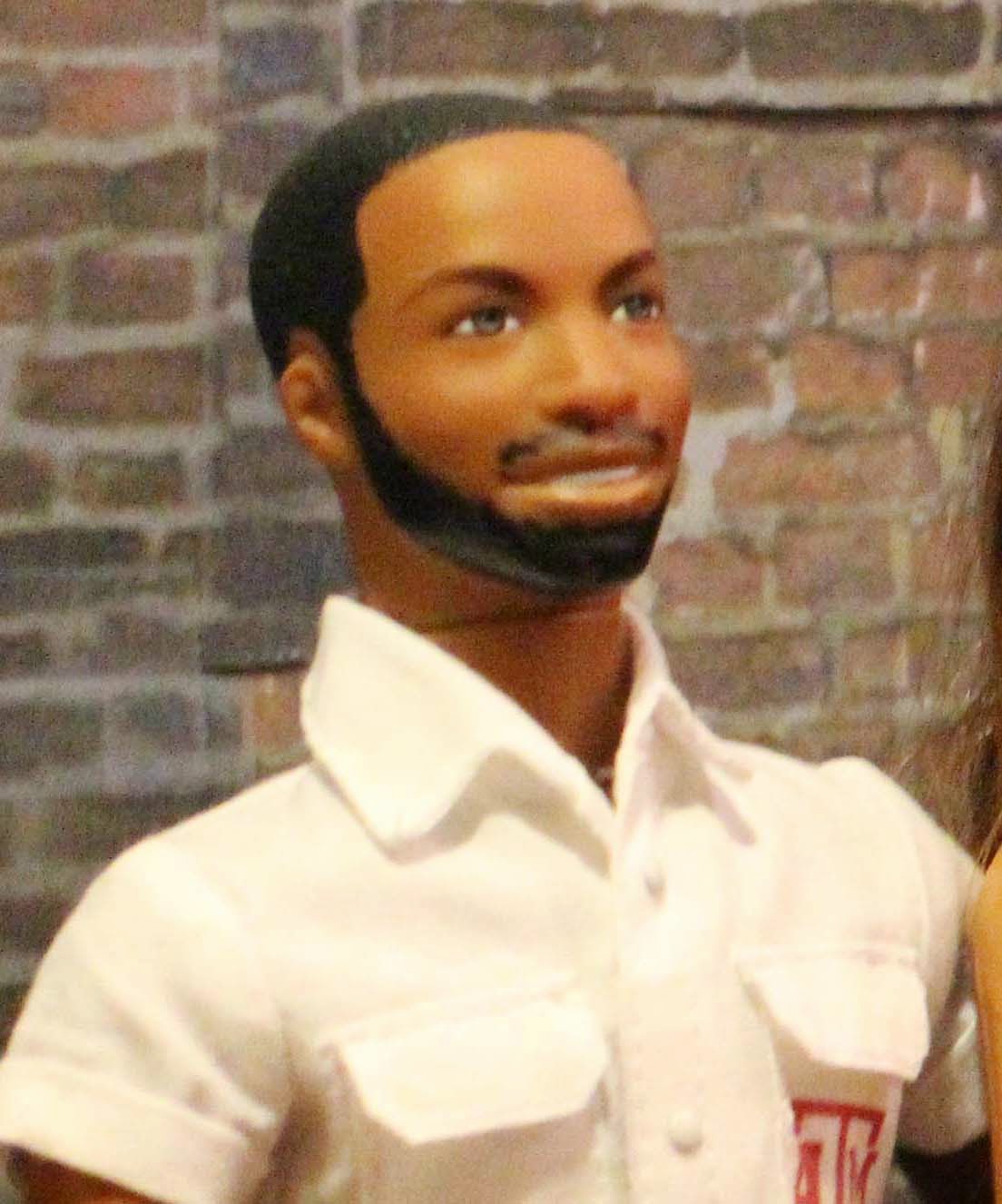 Sharmaine is so happy they are moving back to Hanaly Corners. The Fishers have always been a close family and she misses that day to day interaction. She wants her children to be close to their grandparents as do her parents. 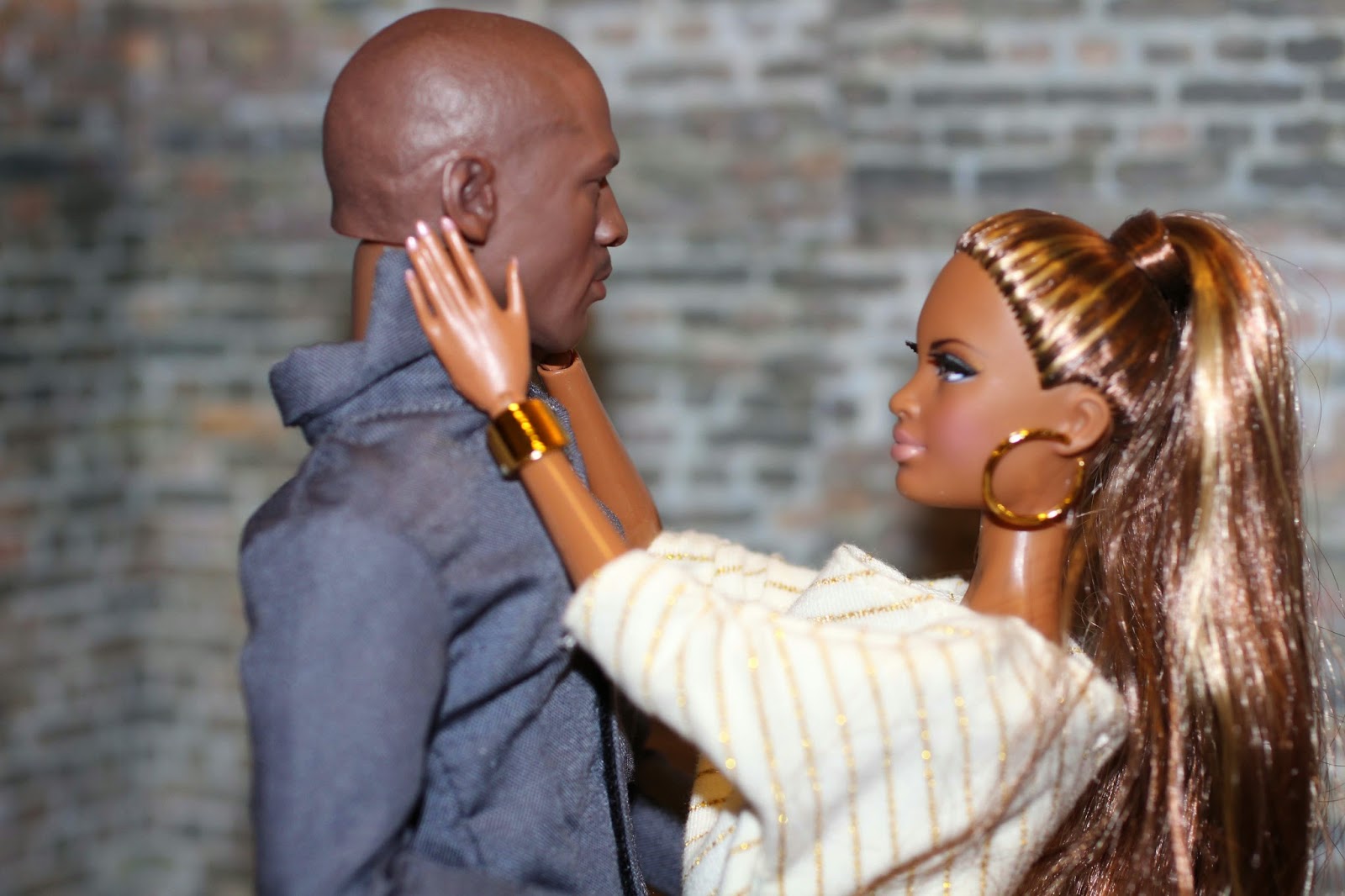 Sharmaine: Oh, honey, thank-you for making this move to Hanaly Corners. I love you so much for doing this for me."
Michael: Babe, the time is right for this right now. I know how much you love your family and how important it is for you to be close to them. You have followed me for all these years because of my pro basketball career and I am so happy to be able to do this for you." 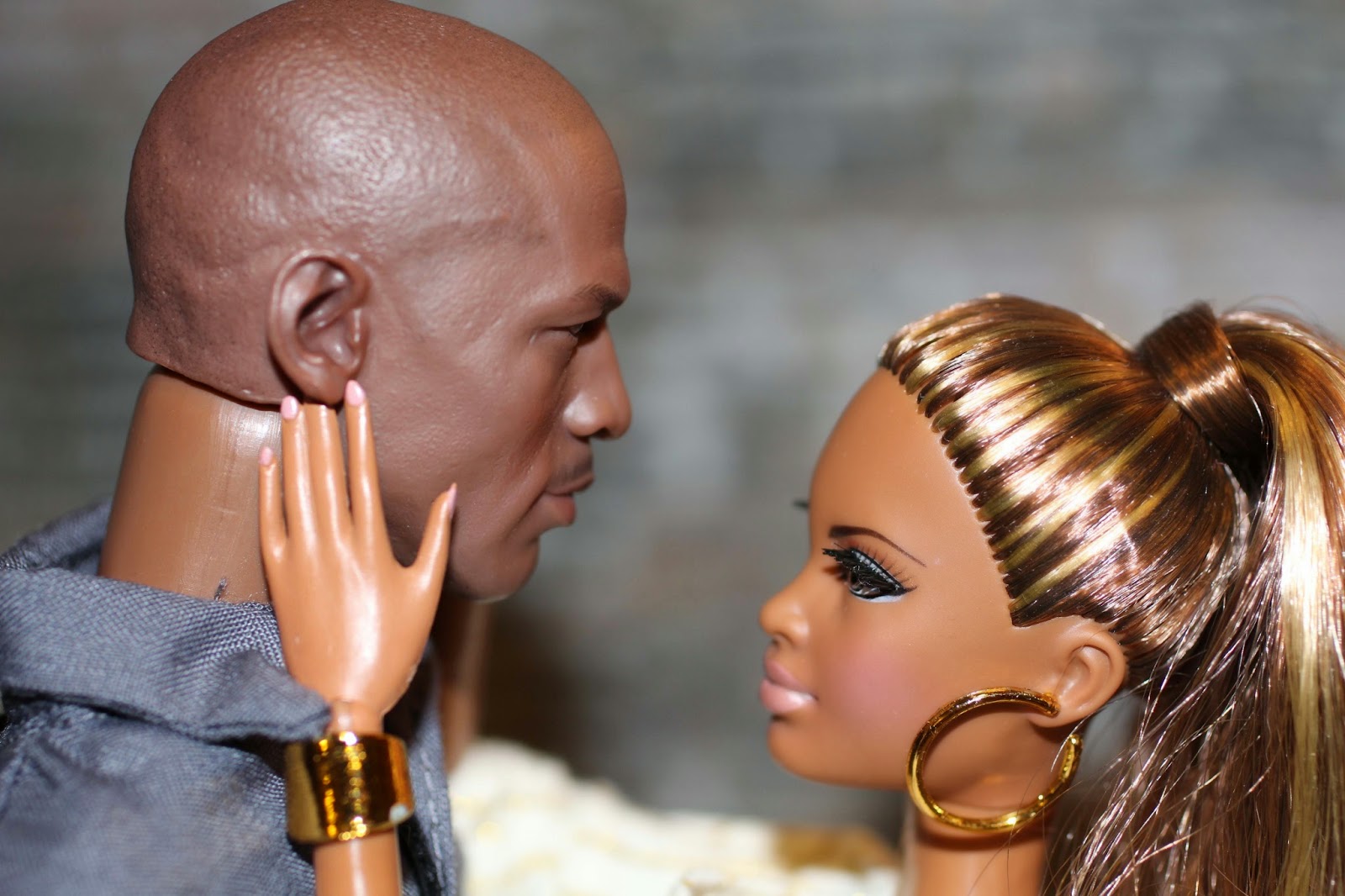 Sharmaine: "I love you, honey, with all of my heart!" "You mean everything to me."
Michael:  "You know I feel the same. Without you and our family, I would have nothing. I love you!"

Hope you enjoyed this little story. Be prepared to see more of these people. I have a lot in store for them.