Happy Adoption Day to My Daughter!

When they say time flies, they are really not kidding! On January 19, 1997 in a beautiful hotel in Nanchang, Jiangxi Province, China, I first laid my eyes on my very first daughter. I remember it like it was yesterday. The myriad of emotions I felt are still with me on this anniversary. I remember feeling scared and panicky after arriving in China. What on earth made me think I could do this all by myself?! But, when they handed me this tiny little bundle of sweetness, I looked down on her and fell in love. She was the most beautiful baby I had ever seen. I was so overwhelmed with emotion, I thought my heart would burst. I was suddenly a mom! This was something I never thought I would be. Now, 19 years later, I still get that feeling when I look at both of my girls. Below, is the picture I received from China (called a referral photo).

She has grown to be a beautiful young woman. She is a wonderful artist, a caring individual and a joy to be around (well, most of the time!) Here she is now: 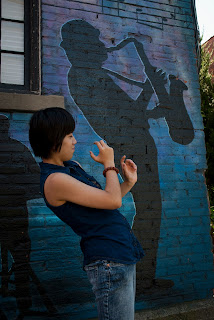 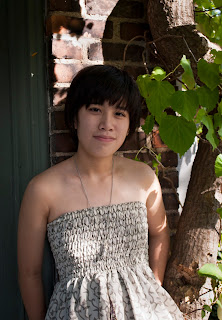 On the 5 year anniversary of her adoption in 2002, I wrote the below poem to help her to understand a little about her start in life and how we became a family:

5 years ago I took a trip all the way across the sea
And on that trip I first met you and we became a family.
I'd prayed and prayed that someday I would be a Mom
And the Lord, He gave His answer but I did not know where from.

Meanwhile somewhere in China a woman had a baby girl,
But, alas, the laws of that country would not let her keep her pearl.
So one sad day she took you to the Guixi Children's Home,
And she kissed you and said "I love you" and she prayed for you a
home.

She said she would remember you, she hoped you'd understand
That she must leave you now so that your life could be more grand.
On that day God planted a seed that could not be torn apart,
And you were born again, but this time in my heart.

Now came a day in November of 1996
That the postman brought your picture and my heart was filled with bliss.
I cried and held you deeply right there in my heart,
Until the day when I could board the plane for China to depart.

There were so many stops that were made along the way,
From Detroit to Chicago then on to L.A.
Then finally on to China where our hearts and eyes would meet,
In a hotel known as the Lakeview where others go to greet.

My heart jumped with joy as I saw you across the room,
Then I waited 'til they called my name which happened very soon.
Then I held you close and looked as you cried there in my arms
And I tried so hard to reassure you that you'd never come to harm.

Somewhere in the scurry of that very busy day,
You laid your head upon my chest as if you were to say,
"I know you are my mommy and I trust you now you see,
I will hold on to you tightly and let you take care of me!"

So on that day 5 years ago our hearts began to bond
Ever growing with love so wonderful a gift from the great beyond.
Now as I watch you sleeping in our home in Michigan,
My heart fills with joy as I remember that special day again.

I thank God for His angel and its true now that I know,
That the years and years of waiting were His own way to show
That in his gracious wisdom it was always meant to be
For us to be together as a forever family.

Thanks for letting me share this moment with you all!