Well that may be an understatement! You see, I live in Clarkston, Michigan in the USA. You may be seeing on the news in your part of the world the breaking story of the latest school shooting in the US. My house is just 13 miles from the Oxford High School were the shooting happened. We have friends who have family attending this school. My 21 year old daughter ran track while in high school and she attended track meets at this school. This is just too close to home. There is a cloud of shock and depression hanging over the surrounding communities. Today, there was a list of at least 20 area schools who have closed their doors for the remainder of the week due to threats being called into these schools. Most unfounded. Thought to be funny by those sick enough to call in the threat. The shooter is a 15 year old student who attended Oxford High school. 4 students lost their lives ages 14 to 17. 7 more victims are recovering from their wounds, some still in critical condition. Hundreds more who feared for their lives as they barricaded themselves in classrooms. Sad beyond belief. You ask yourself how this can happen. Why does this happen. My heart is heavy and breaks for the families, the community, our friends and neighbors. It is hard to think about anything else right now.

My last post was in June of 2021 where I posted about my Signature Barbie Looks doll aka Victoria. After that, I posted a photo on the Barbie Collector Facebook page showing my collection of all 6 dolls in which I had multiples of each doll. Anyone that knows me at all knows that I do a lot of rebodying and I did order 4 of each doll and surprisingly was able to get most of what I ordered. However, I was shocked at the hate comments I received. It was as if I had single handedly caused the worldwide shortage of these dolls and I was responsible for the hundreds of people who did not place orders until late in the game and thus had a hard time getting their hands on them. Note, that there were many who had posted getting up to 10 of each doll, yet I was the one to receive the hate. I removed my post and the detestable comments and went silent on doll posts after that and lost some enthusiasm for blogging too.

But here is a photo of my dolls from that line.

But let's take a step back a bit. Coming out of 2020 wasn't easy. We had been living in a sort of isolation, not attending family or other functions. My eldest daughter had gone back to work to help closeout a factory that was planning on closing their doors in February of 2021. She accepted the assignment as they offered her a lucrative retention bonus to stay on until the doors closed. My youngest who worked at an emergency vet clinic, also went back to work in the last quarter of 2020. I kept the home fires burning, but we were careful around each other being diligent to wearing our masks even when around each other as they were out in the public.

At Christmas time (2020), we noticed that our cat, Jasmine, seemed to act a little bit weird, sometimes losing her balance. We took her to our local vet at the first available appointment in January 2021 and had her checked out with blood tests and a full workup, but they said she was OK, but may be having the beginning of something neurological. Shortly after that, she began falling against the wall as she walked and she was losing weight. Her breathing was labored. We knew it might be something very serious. Hannah, who worked at the emergency vet clinic, decided to take her to work to have them check her out. The first thing they told us was that she had a heart murmur, which our vet did not detect. The emergency clinic also noted the she was having breathing issues so they xrayed her lungs. The vet looked at Hannah and said "maybe we should get your mom on the phone". The vet then told us that she had very advanced, fast growing lung cancer. Not treatable, not curable. All we could do was give her palliative care, but that she maybe would live another month or two. So on February 18, 2021 we took her home with some meds and spent everyday doting her with attention, but she deteriorated rapidly. After only about 2 weeks, her breathing was so bad that we knew we could not let her suffer any longer. On March 4, we had to say our final farewell to her. We had our beautiful little angel kitty for 14 years. It was so hard on everyone! 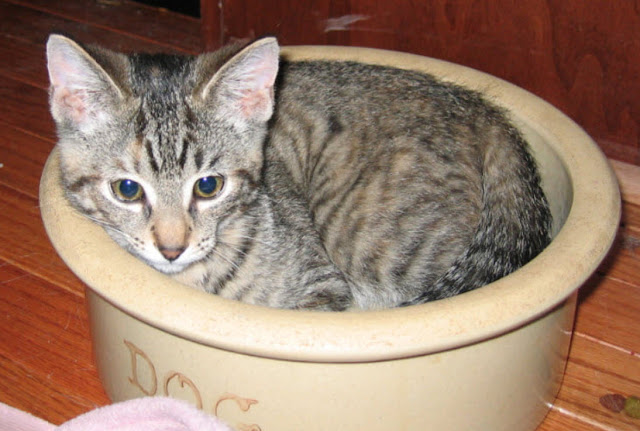 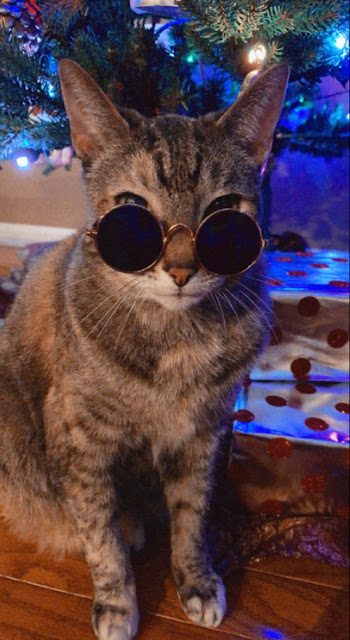 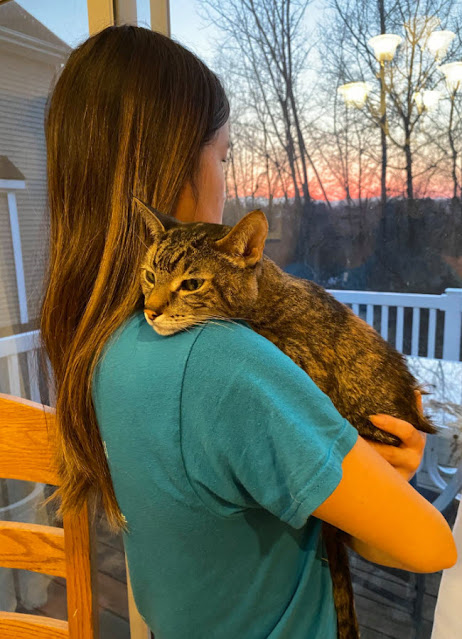 Goodbye sweet Jasmine!
While all of this was going on, the COVID vaccine became available and I was able to get my first dose on February 9 and my second dose on March 9. Because my daughter's were working in jobs where they were in contact with the public, they were also able to get their vaccines in the spring. Things started to go back to a bit of normalcy. I continued to buy dolls! Here are a few of the dolls that I purchased in 2021. 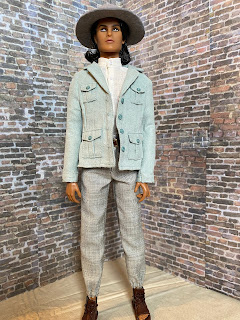 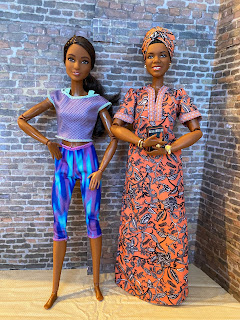 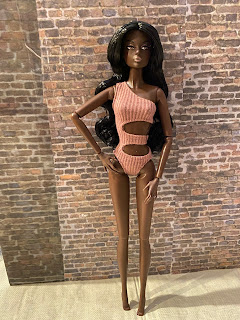 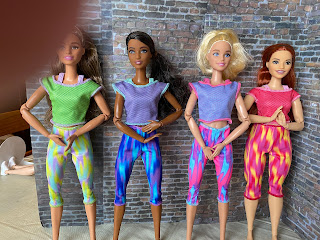 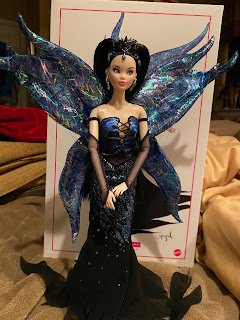 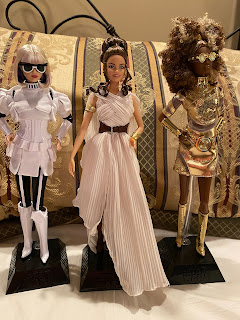 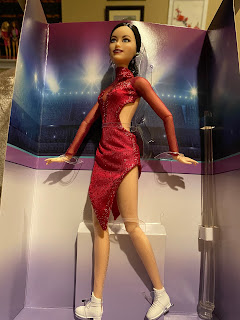 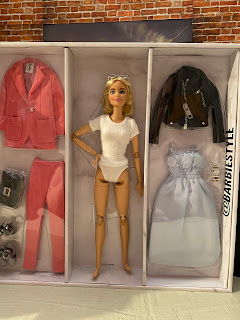 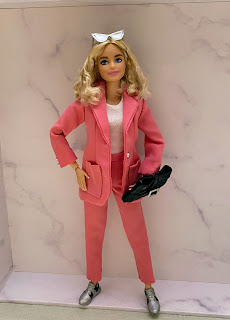 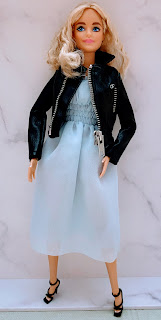 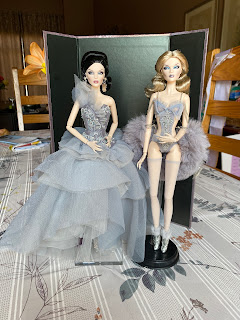 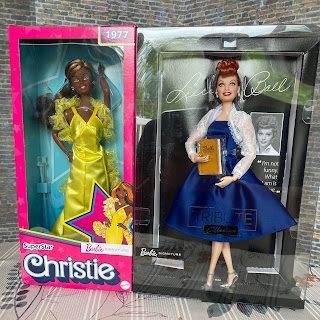 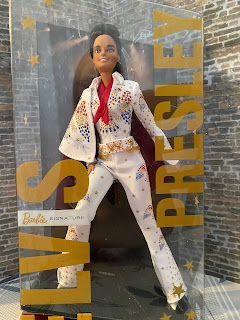 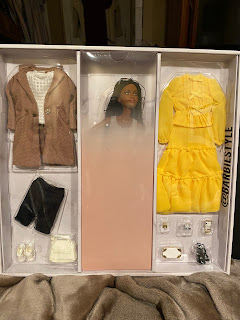 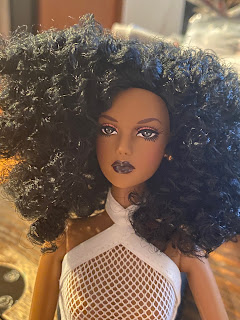 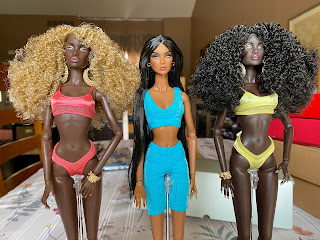 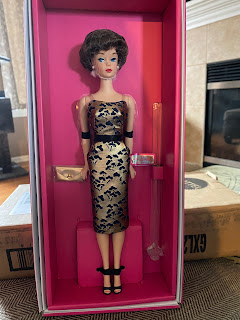 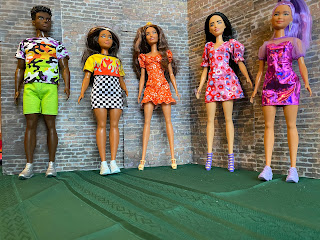 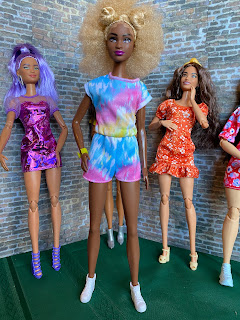 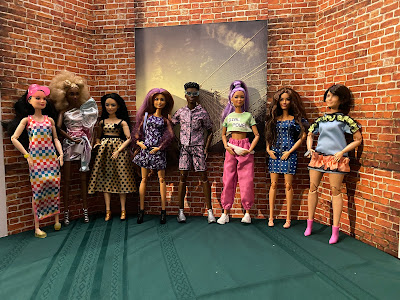 OK, so maybe there were more than a few! LOL! I will post more about my dolls in future blog entries. There are more coming for sure!

In September, I caved in and allowed my eldest to get a cat with the provision that the cat is her total responsibility. She buys the food, takes it to the vet and the cat moves with her when she moves out next year! Here is her cat named Mushroom! 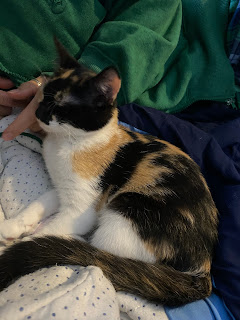 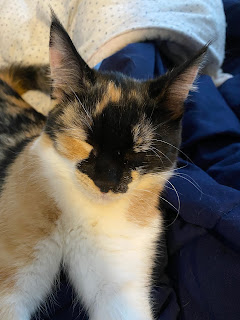 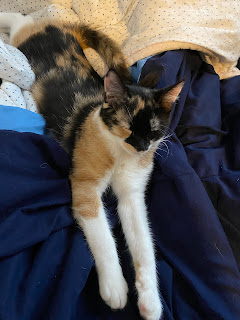 She is a cute kitty (sshh, don't tell my daughter I like her!)
One last pet item, which is a little sad too. We found a lump on the left rear flank of our 12 year old dog, Carly. Since she is prone to having benign lipomas that the vet has said were not necessary to remove as they come back, we were not too concerned, but decided to get it checked out. This lump turned out to be a type of malignant mast cell tumor. Because she is otherwise healthy, we did decide to have it removed along with a very large lipoma. I am happy to report that she is doing well after having surgery. we are still waiting on the pathology to see if it has spread, but we are feeling optimistic. I am not going to post surgery photos as they are very graphic, but here is a photo of her before surgery.

Well, that brings us up to date! Mostly! Christmas is right around the corner and I am sure some new dolls will sneak their way into my collection. I will try to post a little more too! I hope all of you are doing well. God Bless!